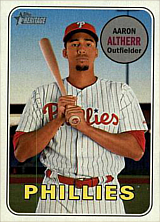 Aaron Altherr reached the major leagues in 2014 after playing for the German national team.

In 2012, the 21-year-old fielded .996 in the outfield and produced at a .252/.319/.402 clip for Lakewood with 25 steals in 33 tries. He was tied for 6th in the South Atlantic League in triples. Having been born in Germany, he joined the German national team for the 2013 World Baseball Classic Qualifiers. He went 6 for 11 with a double, two home runs, five runs and six RBI to lead Germany's offense; he led Germany in hits, average and OPS, tied Matt Weaver for first in homers, tied Eric Suttle for first in runs and was second to Weaver in RBI. For the Regensburg qualifier, only Jimmy Van Ostrand had more home runs, more runs or a better OPS. His solo homer off Andrew Albers in the finale was Germany's only run as Team Canada blew them out to advance.

Aaron got his first call-up to the majors by the Phillies on June 16, 2014, when Tony Gwynn, Jr. was placed on the bereavement list following the death of his father, Hall of Famer Tony Gwynn. He was hitting .245 in 52 games for the Double A Reading Fightin Phils at the time. He made his debut on June 16th, when he flied out as a pinch-hitter for Mario Hollands in the 12th inning of an eventual 6-1 win over the Atlanta Braves. He went 0 for 5 in his brief stint with the Phillies. Altherr had a career game the next season on September 25, 2015, when he had 4 hits, including 2 homers in an 8-2 win over the Washington Nationals. The first of the homers was an inside-the-park grand slam, made possible when center fielder Michael Taylor missed the ball in attempting a diving catch and saw it roll to the wall. It was the first such homer since Randy Winn had hit one in 1999, and the first for a Phillies player since Ted Kazanski in 1956. He hit .241 with 5 homers and 22 RBI in 39 games.

Heading into spring training in 2016, Altherr was consistently mentioned among the players to watch in camp, given the team was rebuilding and willing to give him a lot of playing time at the major league level. Those plans hit a snag as Altherr underwent surgery in early March to repair a torn tendon sheath in his wrist. He was expected to be out for four to six months and indeed missed the entire first half, not making his return until July 28th. That day, he homered off Atlanta Braves starter Matt Wisler as part of a 3-for-4 night as the Phillies won, 7-5. He ended up playing just 57 games, hitting .197 with 4 homers and 22 RBI. He had a much better season in 2017, as he played all three outfield positions and was the team's most productive hitter until the emergence of Rhys Hoskins in August. The highlight of his season came on September 18th, in a game against the Los Angeles Dodgers, when he hit his second career grand slam off Clayton Kershaw in a 4-3 win. It was the first time Kershaw had ever given up a homer with the bases loaded in more than 1,900 innings. Two days later, he hit a two-run homer in the 7th and a two-run single in the 8th to give Philadelphia a 7-5 win over Los Angeles, the Phillies' 8th win in their last 10 games.