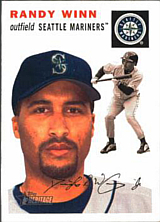 Randy Winn was a 3rd round selection for the Florida Marlins in the 1995 Amateur Draft. A speedy outfielder, Winn stayed in the Marlins minor league system until the Tampa Bay Devil Rays selected him with the 57th pick of the 1997 expansion draft. He joined the big league club as part of the Devil Rays inaugural team of 1998, batting .287/.337/.367 in 109 games while leading the team in triples (9) and stolen bases (26). Winn blossomed during his years at Tampa Bay, eventually gaining an All-Star nod in 2002. He was one of the few players to have been traded for a manager. Officially, the Devil Rays sent him to the Seattle Mariners on October 28, 2002 for shortstop Antonio Perez; however, the uneven trade was compensation for the Rays hiring away Lou Piniella to become their manager.

Winn spent 2 1/2 years as a starting outfielder for the Mariners. Then, on July 30, 2005, he was dealt to the San Francisco Giants for Jesse Foppert and Yorvit Torrealba. Winn spent the next two months tearing up the National League, batting .359/.391/.680 over 58 games with 14 home runs. The 14 homers were the surprise, tying his career high for homers in any full big league season. He also hit for the cycle, turning the feat August 15 against the Cincinnati Reds. Winn spent the next four seasons with the Giants, getting regular playing time across all three outfield positions. He got in one final season in 2010, playing for the New York Yankees and St Louis Cardinals.

Randy Winn played baseball and basketball at Santa Clara University. His roommate with the Broncos was future NBA Most Valuable Player Steve Nash.