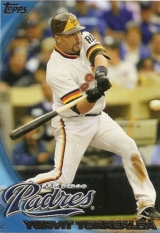 Yorvit Torrealba was a major league catcher. He was originally signed by the San Francisco Giants out of his native Venezuela in September of 1994. He began his professional career with the Class A Bellingham Giants in 1995, and slowly made his way to the major leagues, never hitting more than 8 homers in a season, and moving regularly from minor league team to minor league team. He made his major league debut with the Giants in September of 2001, after having hit .274 with 8 homers and 36 RBI in 115 games for the AAA Fresno Grizzlies that year. He only played in 3 games in his first call-up, going 2 for 4, but was a full-time major leaguer starting in 2002, and never looked back, only making two brief stays in the minor leagues in the decade that followed his major league debut, 10 games in 2006 and 4 in 2009, both times with the Colorado Springs Sky Sox.

Torrealba was a back-up catcher for the Giants until 2005, playing around 60 games per year with a handful of homers and a batting average of .251. He was part of the team that reached the 2002 World Series but did not play in the postseason that year as Benito Santiago got all the work. On July 30, 2005, he was traded to the Seattle Mariners with Jesse Foppert for OF Randy Winn. He hit .241 in 42 games in his brief stay in Seattle, then after the season was traded to the Colorado Rockies for Marcos Carvajal. In Colorado, he got a chance to play more often, and after hitting .247 with 7 homers in 65 games in 2006, he became the starter in 2007 as the Rockies caught fire late in the year and reached the postseason on the back of a huge winning streak. He played 113 games, with numbers consistent with his production to date: a .255 average, 8 homers and 47 RBI. He did well in the postseason, hitting .500 in the NLDS, then belting a homer and driving in 4 runs as the Rockies swept the Arizona Diamondbacks in the 2007 NLCS. However, like the rest of his team, he was rolled over by the Boston Red Sox in the 2007 World Series, going 2 for 14. Just like it looked as though Yorvit had found a starting job for the long term, he went back to sharing playing time, this time with Chris Iannetta, whom the Rockies expected to blossom into a star. In 2008, Torrealba played 70 games, hitting .246, then in 2009, his batting average was a career-high .289 in 89 games. Iannetta faded down the stretch that year as the Rockies won the National League wild card. Yorvit was the starter in the postseason, hitting very well in the NLDS when he went 5 for 14 as the Rockies lost in 4 games to the Philadelphia Phillies.

Torrealba left the Rockies after the 2009 season, signing as a free agent with the San Diego Padres for 2010. He was a starter again, playing 95 games, with 7 homers and a .271 average. He received good reviews for his handling of the pitching staff as the Padres appeared destined to run away with the division title. However, they faltered down the stretch and were caught and passed by the Giants in the season's last days. Yorvit changed teams again after the season, joining the Texas Rangers in 2011. He was the primary starter behind the plate, hitting .273 in 113 games, with 27 doubles, 7 homers and 37 RBI. It was good production for him, but much less than his back-stop partner Mike Napoli, who also played some first base and was a DH. The Rangers won their division, and in the postseason, manager Ron Washington made Napoli his starter, a good decision as his bat was red hot all the way until the end of the World Series. But when Torrealba did play, he also hit well, going 4 for 9 with a double in the 2011 ALCS and 2 for 5 in the Series as the Rangers lost a heart-breaking seven-game series to the St. Louis Cardinals.

Playing for the Leones del Caracas in the Venezuelan League on December 23, 2011, he got involved in an uncharacteristic incident, getting incensed at home plate umpire Dario Rivero Jr. after being called out on strikes. The argument became heated and he struck the umpire on the mask. He was handed a hefty 66-game suspension by league President Jose Grasso Vecchio, the suspension covering the remainder of this season and all of the following one. Yorvit issued a statement of apology after the incident. He returned to the Rangers for the 2012 season now clearly the back-up behind Napoli, who was voted the starter in the 2012 All-Star Game. Torrealba played relatively little, getting into 49 games with a .236 batting average, with 3 homers and 12 RBI. On July 30th, he was designated for assignment immediately after the Rangers acquired Geovany Soto from the Chicago Cubs in a trade. Ironically, Soto was hitting only .195 at the time, well below Yorvit's average. He finished that season playing for both the Toronto Blue Jays and Milwaukee Brewers, albeit for a total of just 15 games. He finished his career by returning to the Rockies in 2013, where he hit .240 with no homers and 16 RBI in 61 games.

Torrealba's son, Yorvis Torrealba, was a junior outfielder for the University of Tampa in the 2019 Division II College World Series [1]. Yorvis was drafted by the Colorado Rockies in the 20th round of the 2019 Amateur Draft. Ironically, Yorvit was playing for the Rockies in 2009 when Yorvis and two of his uncles were kidnapped and held for $500,000 in ransom in Venezuela [2].

He is not related to contemporary Venezuelan catcher Steve Torrealba.