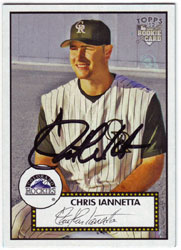 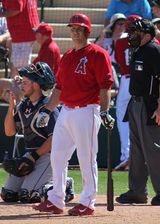 Chris Iannetta hit .333/.431/.539 in a fine freshman year in college. He was named to Baseball America's All-Freshman team second string. His sophomore season in 2003 marked a fall to .319/.407/.496 and no major honors. In '04, Iannetta batted .336/.438/.598 and Baseball America picked him for third-team All-American behind Kurt Suzuki and Landon Powell. He made the Atlantic Coast Conference All-Conference team and his 15 homers were four behind the conference leader. As the Oakland Athletics had drafted Suzuki and Powell, they had no need for him in the fourth round of the 2004 amateur draft, which is when the Colorado Rockies snagged him. He was signed by scout Jay Matthews and made his pro debut that summer.

Iannetta had a massive drop in production in 2015, as his batting average fell to .188 and his OBP to .293, even though he hit 10 homers in 92 games. He was still the Angels' regular catcher, but lost playing time in favor of rookie Carlos Perez as the season progressed. The Angels declined to re-sign him after the season and on November 23rd, he inked a one-year deal with the Seattle Mariners, with the plan that he be the starting catcher in 2016 while one-time top prospect Mike Zunino worked to get his career back on track. he played 94 games for Seattle, hitting .201 with 7 homers and 24 RBIs and became a free agent again after the season. In 2017, he was with the Arizona Diamondbacks. On May 12th he suffered severe facial lacerations and a concussion when he was hit in the face by a pitch thrown by Johnny Barbato of the Pittsburgh Pirates. He escaped what could have been very serious injuries, but was still out of action until May 21st. He homered off Clayton Richard of the San Diego Padres in his first game back - he had also homered in the game in which he had been injured - and continued to display excellent power in hs next few appearance, with two more homers over his next four games. The second of these was as a pinch-hitter against Tony Watson of the Pirates, a two-run shot that tied the game in the 9th inning on May 29th. On June 8th, he had a career game against the Padres, going 3-for 5 with 2 doubles and homer, scoring 3 runs and driving 7 in a 15-3 win. The homer was once again hit off Richard. He finished the year at .254 in 89 games, with 17 homers and 43 RBIs, providing the offensive part of a catching tandem in which Jeff Mathis was the defensive wizard; utility player Chris Herrmann also saw playing time at the position. The Diamondbacks made it to the postseason and he went 0-for-5 in two appearances in the Division Series against the Los Angeles Dodgers.

On December 8, 2017, he returned to the Rockies on a two-year free agent deal. It was not clear whether he would be the starter, as the Rockies were still interested in re-signing another free agent, Jonathan Lucroy. In 2018, he was Colorado's regular catcher, playing 110 games and hitting .224 with 11 homers and 36 RBIs. His defensive play was solid, as the Rockies almost won a division title thanks to some excellent pitching, but his hitting was sub-par. He was shut out in the postseason, going 0 for 3 in the Wild Card Game against the Chicago Cubs, and 0-for-6 in the Rockies' loss to the Milwaukee Brewers in the Division Series. He returned to Colorado in 2019 but saw his playing time diminish as Tony Wolters took over as the regular. On August 13th, he was hitting .222 with 6 homers and 21 RBIs in 42 games when he was designated for assignment when the Rockies decided to give youngster Dom Nunez a look. He left as the franchise's all-time leader in games caught.