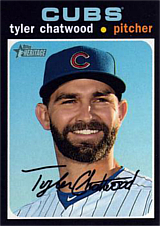 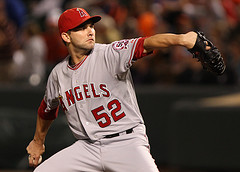 Blessed with a 97 mph fastball, Tyler Chatwood is a veteran of nine big league seasons. He is not to be confused with Joie Chitwood, the daredevil star of the Joie Chitwood Thrill Show.

The Los Angeles Angels and scout Tim Corcoran took Tyler with their first overall selection, in the second round, of the 2008 amateur draft, signing him for a $517,000 bonus. Tyler was 1-2 with a 3.08 ERA for the 2008 AZL Angels in his debut, striking out 48 but walking 36 in 38 innings. In 2009, he was 8-7 with a 4.02 ERA for the Cedar Rapids Kernels, showing somewhat better control (66 walks in 116 1/3 innings). He climbed the ladder in 2010, earning Angels Minor League Pitcher of the Year honors while making stops with the Rancho Cucamonga Quakes (8-3, 1.77), Arkansas Travelers (4-6, 3.82) and Salt Lake Bees (1-0, 6.35). His control continued to improve, with 63 walks in 155 1/3 innings, though his strikeout rate was worse (he fanned 109). He led Angels farmhands in ERA and tied Patrick Corbin for the most wins. Had he qualified, he would have led the California League in ERA. Chatwood was named the 76th best prospect in baseball, 4th best prospect in the California League (after Mike Trout, Brandon Belt and Grant Green) and 2nd best prospect in the Angels chain (after Trout) according to Baseball America entering 2011. They also rated him the best pitching prospect with the best fastball in the Cal League.

In early 2011, after one inning with Salt Lake City, he was called up when Kevin Jepsen and Michael Kohn were sent down; he replaced Scott Kazmir in the rotation and became the youngest player to appear in the AL (to that point). In his major league debut on April 11th, he dropped a 4-0 decision to Mitch Talbot and the Cleveland Indians. He retired his first batter, Michael Brantley, but then gave up a home run to Asdrubal Cabrera on his eighth pitch. In the second, he retired Travis Hafner, but then allowed a single to Orlando Cabrera, a double to Austin Kearns and a homer to Matt LaPorta to fall behind 4-0. He recovered to toss shutout ball over the next three innings before being relieved by Francisco Rodriguez. He earned his first win in his next start on April 16th, beating the Chicago White Sox, 7-2, giving up only one run in 7 innings. He stayed in the rotation until the end of July, then was skipped a few times in the last two months in order to limit his innings. He was pretty solid in the early going, but the Angels were 1-11 in his last 12 starts and his ERA was 7.38 over the second half. He finished the year with a record of 6-11, 4.75 in 27 games, having pitched 142 innings with 71 walks and 74 strikeouts.

On November 30, 2011, Chatwood was traded to the Colorado Rockies for catcher Chris Iannetta. He made 19 appearances for the Rockies in 2012, including 12 starts, going 5-6 with a 5.43 ERA. He pitched only 64 2/3 innings as the Rockies experimented with putting their starters on very low pitch counts that season. In 2013, he was very good, finishing the year 8-5, 3.15 in 20 starts. He pitched 111 1/3 innings, back to more traditional use. Briefly after the start of 2014, on April 29, he experienced elbow tightness in his fourth start and left a game early. He was ordered to take six to eight weeks of rest before resuming throwing. When he did, he experienced a setback, and on July 17th, the Rockies announced that he would undergo Tommy John surgery costing him the remainder of this season. The healing did not go properly, and he had to undergo a second operation that cost him all of 2015 as well.

Chatwood regained his spot in the Rockies' rotation in spring training in 2016 and made his first start in almost two years on April 6th. On June 6th, he pitched the best game of his career facing the Los Angeles Dodgers at Dodger Stadium, as he gave up only one hit in 8 innings, a second-inning single by Howie Kendrick, in winning, 6-1, and improving to 7-4 on the year. He was particularly dominant on the road in the early going, with a record of 5-0, 0.43. He finished 12-9, 3.87 on the year, making 27 starts and pitching 158 innings while striking out 117 batters. On April 15, 2017, he pitched his first career shutout, a two-hit gem in defeating the San Francisco Giants, 5-0. It was clear from the start of the game that he had his best stuff, as he retired the first 17 batters until Chris Marrero singled with two outs in the 6th. On May 24th, he had another great start, this time against the Philadelphia Phillies, as he gave up only one hit in seven scoreless innings in a 7-2 win. He went 8-15, 4.69 on the year, his 15 losses leading the National League, but his numbers were better than immediately apparent. His ERA+ was an okay 107 after having been 125 the year before, he struck out 120 batters in 147 2/3 innings and his road ERA was a very good 3.49.

When he became a free agent after the season, he was identified as someone who could be quite useful despite passing under the radar. Indeed, he was among the first free agents to change teams as he signed a three-year deal worth $38 million with the Chicago Cubs on December 7th. He made his debut on April 2, 2018 against the Cincinnati Reds, and while he was constantly in and out of trouble, he allowed just a run in 6 innings. Unfortunately, the Cubs' batters were mired in a collective slump, and that single run was enough to hang a loss on him. The rest of the season was not good. He was moved to the bullpen on the club's acquisition of Cole Hamels, with a 4.98 ERA and 84 walks in just 95 innings, eventually finishing at 4-6, 5.30 with a league leading 95 walks to just 85 strikeouts in 24 games. His banishment continued into 2019, operating as an expensive long man/swingman, with a 5-3, 3.76 record in 38 appearances (76 2/3 innings), cutting his walks to a more respectable 37. In 2020, the final year of his contract, he made 5 starts, going 2-2, 5.30, with 9 walks and 22 hits in 18 2/3 innings.

Following his disappointing three-year stint in Wrigley Field, he became a free agent and on January 18, 2021 reportedly signed a one-year deal with the Toronto Blue Jays for $3 million with an additional $2.5 million in performance bonuses. That gave the Blue Jays the two most walk-prone pitchers in baseball, as they had re-signed Robbie Ray, the major league walks leader, earlier that off-season. In both cases, the hope was that if either pitcher was able to cut down walks just a little, their overwhelming stuff could make them very successful. His season was a study in frustration. At points, including the first three weeks or so, he was tantalizingly good, locating his above-average stuff perfectly and sending opposing hitters flailing helplessly. He only allowed one earned run between opening day and May 23rd as the principal set-up man for whoever was closing for the Jays on that particular day, but he then lost it completely, with 11 runs allowed over his next four outings as his ERA ballooned to 5.31 on June 4th; he also completely lost the plate, allowing 9 walks in a stretch of 3 1/3 innings during that skid. He then reeled off 8 consecutive scoreless outings, albeit largely in low-leverage situation, giving hope that he had only gone through a temporary hiccup. However, he had a relapse at the end of June, giving up 5 runs in 1 inning over 2 outings. He went on the injured list at that point, with a record of 1-2, 5.46 in 30 outings, and 20 walks in 28 innings. On July 30th, when the Blue Jays acquired José Berríos in a trading deadline deal, he was unceremoniously designated for assignment, ending his tenure wuth the team.