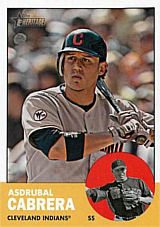 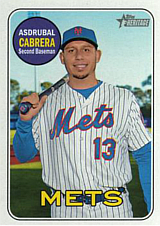 Asdrúbal Cabrera is a two-time AL All-Star and former Silver Slugger who was a key contributor to the first Washington Nationals world championship.

Cabrera was signed by scout Emilio Carrasquel in August 2002 for the Seattle Mariners. He debuted professionally with the 2003 Aguirre team and hit .283/~.369/.384, making the Venezuelan Summer League All-Star team at shortstop. In 2004, he debuted in the US with the Everett AquaSox and batted .272/.330/.427 in 63 games, making the Northwest League All-Star team at shortstop. Baseball America ranked him the #8 prospect in the NWL, between Richie Robnett and Matt Macri. In 2005, Cabrera led Mariners farmhands with 10 triples. He played for the Wisconsin Timber Rattlers (.318/.407/.474 in 51 games, mostly at second base), Inland Empire 66ers (.284/.325/.418 in 55 games, mostly at shortstop) and the Triple A Tacoma Rainiers (.217/.250/.304), reaching the top rung of the minors at just 19. Baseball America rated him the best defensive second baseman in the Midwest League, the #19 prospect in the MWL and #12 in the California League, between John Danks and Chris Iannetta.

Asdrúbal hit .236/.323/.360 for the Tacoma Rainiers in his first 60 games of 2006, then was inexplicably then dealt to the Cleveland Indians for a washed up Eduardo Perez. With Cleveland, he was assigned to the Buffalo Bisons and batted .263/.295/.337 in 52 contests. In 2007, Cabrera spent most of the year in AA. He produced at a .310/.383/.454 line in 96 games for the Akron Aeros with 78 runs scored and 23 steals (in 30 tries). He batted .316/.350/.395 in nine contests for the Bisons also. Through August 25th, he was tied for fourth in the Eastern League with Jackson Melian in average. By that time, though, Cabrera was already in the majors. Called up to replace Mike Rouse on the roster, Cabrera grounded out to second baseman Andy Gonzalez while facing Jon Garland in his first at-bat on August 8th. He hit .283/.354/.421 in 45 games for the Indians and made just one error in the field. He was a starter in the postseason, contributing a key homer as Cleveland upset the New York Yankees in the ALDS, and then going 7 for 29 when they pushed the Boston Red Sox to seven games in the ALCS.

Cabrera turned an unassisted triple play on May 12, 2008 against the Toronto Blue Jays. He made a diving grab of a liner from Lyle Overbay, touched second to force Kevin Mench then tagged out Marco Scutaro to do the deal. It was the 14th such play in MLB history. He played 114 games and hit .259 that season, then improved to .308 in 131 games in 2009 after switching from second base to becoming a regular shortstop. He hit 42 doubles that season, a personal best. On May 17, 2010, Cabrera fractured his left forearm in a collision with third baseman Jhonny Peralta in a loss to the Tampa Bay Rays. The Indians were in a defensive shift with Hank Blalock at the plate when the two collided behind second base as Cabrera dove to field a ground ball hit up the middle. As a result, he played only 97 games, hitting .276.

On May 18, 2011, Asdrúbal hit two home runs and got five hits against the Cincinnati Reds. He became only the fifth major league shortstop with a five-hit, two-homer day; the others had been Roy McMillan, Cal Ripken Jr., John Valentin and Barry Larkin. He made the All-Star team for the first time that year, hitting .273 in a career-high 151 games. He belted 32 doubles as well as a career best 25 homers, stole 17 bases in 22 attempts, scored 87 runs and drove in 92 in what was an outstanding season all around. He was rewarded with the American League [[Silver Slugger Award]|Silver Slugger] as the top-hitting shortstop in the league. Asdrúbal repeated as an All-Star in 2012, hitting .270 in 143 games. He continued to contribute plenty of extra-base hits with 35 doubles and 16 homers. He was the hero for the Indians on Opening Day, April 2, 2013, against the Toronto Blue Jays. He hit a two-run homer off R.A. Dickey in the 5th, then in the 6th, with the bases loaded and none out, made a backhanded grab on a sharply hit ground ball by Adam Lind to start a rally-killing double play that secured his team's 4-1 win. Overall, his production fell as he hit .242 in 136 games with an OBP of just .299; he still contributed with extra-base power, with 35 doubles and 14 homers. He made it back to the postseason for the first time since his rookie season, 2007, but went 0 for 4 as the Indians lost the Wild Card Game to the Tampa Bay Rays.

Asdrúbal's offense continued to slip in 2014. He was hitting .246 after 97 games, with 22 doubles and 9 homers, when he was dealt to the Washington Nationals at the trading deadline for bit player Zach Walters on July 31st; the Nats were planning to use him at second base in place of Danny Espinosa. He hit .229 in 49 games for Washington, then went 3 for 15 with a double and a homer as the Nats were defeated by the San Francisco Giants in the NLDS. In 2015, he moved to the Tampa Bay Rays where he played 143 games and hit .265 with 15 homers and 58 RBI. He joined the New York Mets for the 2016 season and hit .280 in 141 games as the team's starting shortstop, with 30 doubles and 23 homers in one of his best seasons. In 2017, his (and the team's) production fell significantly. In late June, the Mets asked him to move to second base, following an injury to Neil Walker, when he himself had just returned from missing 10 games with a sprained thumb. He was not pleased and immediately asked for a trade, claiming that he had not been told beforehand of these plans. However, it seemed to be a ploy to force the Mets to pick up his option for 2018. On August 16th, the Mets were missing two infielders, Jose Reyes and Wilmer Flores, both injured, forcing them to start catcher Travis d'Arnaud at third base. Problem was, he had never played the position professionally, so manager Terry Collins got creative, switching d'Arnaud and Cabrera, who started the game at second base, every time a right-handed batter came to the plate, to minimize the risk of a ground ball being actually hit to the improvised infielder. The two switched positions 18 times during the game against the New York Yankees, making for a rather unusual boxscore, as Cabrera was listed as "2b-3b-2b-3b-2b-3b-2b-3b-2b-3b-2b-3b-2b-3b-2b-3b-2b-3b-2b". He hit .280 in 135 games with 14 homers and 59 RBI and was one of the few veterans not to get off the Mets sinking Viking death ship that summer.

In 2018, he matched his previous year's numbers in fewer than a hundred games; after 98 games, he was hitting .277 with 18 homers and 58 RBI. The Mets struck while the iron was hot, traded him to the Philadelphia Phillies for minor league pitcher Franklyn Kilome, giving Asdrúbal a chance to join a first-place team. He hit only .228 in 49 games as Philly went from serious contender to fizzling out of the postseason race. Cabrera caught on with the Texas Rangers for 2019, hitting .235 with 12 home runs, and was released following the singular trading deadline when a deal for his services failed to materialize. Having become a free agent as a result, he returned to the Nationals for another playoff push, hitting a sizzling .323/.404/.565 in 38 games down the stretch while seeing action in all four rounds of Nationals postseason play as the team won their first World Series.