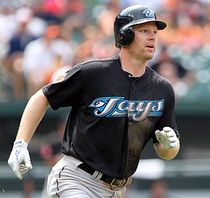 Adam Lind is a first baseman who began his major league career with the Toronto Blue Jays. He made his major league debut in 2006 in striking fashion, slugging .600 in a limited sample of 18 games. In the minors through 2006, he never had less than a .300 batting average and was Eastern League MVP in 2006.

Lind is one of nine major leaguers born in Anderson, IN (through 2007). Other than Lind, the most recent one was Jermaine Allensworth.

Out of high school, Adam was drafted in the 8th round of the 2002 amateur draft by the Minnesota Twins. He instead opted to go on to college. As a freshman at the University of South Alabama, he hit .349/.398/.555 and made the Baseball America freshman All-American second team at first base behind Stephen Head. In 2004, Lind batted .392/.456/.659 and led the Sun Belt Conference in batting average. He made the All-Conference team as an outfielder.

He was then picked in the 3rd round of the 2004 amateur draft by the Toronto Blue Jays, a compensation choice for the loss of free agent Kelvim Escobar. He was signed by scout Joel Grampietro for a $445,000 bonus and made his pro debut that summer. In A ball in 2004, he hit .312/.367/.474 with the Auburn Doubledays in the NYPL with 23 doubles, 7 homers and 50 RBI in 70 games. He was 6th in the circuit in batting average and tied Chris Gimenez for the lead in doubles. 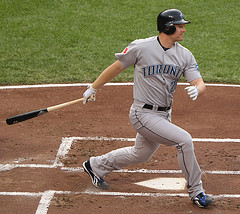 In 2006, he was in AA ball for 91 games, AAA ball for 34 games and in the majors for 18 games. He led the Jays chain with a .330 average and was named their Minor League Player of the Year. He hit .310/.357/.543 for the New Hampshire Fisher Cats, .394/.496/.596 in for the Syracuse SkyChiefs and .367/.415/.600 for the 2006 Blue Jays. He won the Eastern League MVP award, made the league All-Star team in the outfield and was voted the #6 prospect by Baseball America, right behind Adam Loewen. He did not have enough plate appearances to qualify or he would have been second in the EL in average and led in slugging. He had a shot at the Triple Crown before being promoted away. Baseball America also rated him the best batting prospect and best power prospect in the EL. He won his third Webster award in 2006, which is given annually to the top player from each Toronto Blue Jays minor league club.

In 2007, he was expected to be given a chance to compete for the left field job, vacated when Frank Catalanotto left the team. In spite of that, and in spite of slugging .692 in spring training in 2007, Lind was sent back down to the minors because the Blue Jays couldn't find a place for him to play. The Syracuse Chiefs were thrilled to have Lind, who was called "the jewel of the Blue Jays minor league system", playing for them. However, before the middle of April the Blue Jays brought him back up to the major league team, when Reed Johnson was placed on the disabled list. He went 3-for-5 in his first major league game of the season. He hit a disappointing .238/.278/.400 in 89 games for the Jays that season.

After the 2007 season, the Blue Jays re-signed Matt Stairs and indicated a desire to retain Reed Johnson, thus sending Lind back to Syracuse again for the start of the 2008 season, in spite of releasing Johnson at the end of spring training. After hitting a solid .328 with 17 doubles and 6 home runs in 59 games for the Chiefs, Lind was called up for good in June and established himself as the starting left fielder for the Blue Jays for the rest of the year, batting .282/.316/.439 with 16 doubles and 9 home runs in 88 games. His OPS+ with Toronto was 99, low for a corner outfielder.

In 2009, he made the team out of spring training as manager Cito Gaston announced that Lind and rookie Travis Snider would alternate between left field and DH. He started the year with a bang, collecting 6 RBI thanks to a double and a three-run home off the Tigers' Justin Verlander in a 12-5 win on opening day, April 6th. That marked the start of a breakthrough season that saw him hit 35 home runs and drive in 114 runs as the Jays' primary DH. He hit another opening day home run in 2010, connecting off the Rangers' Scott Feldman on April 5th. His production went significantly down in comparison with the previous year, however, as he hit only .237, with 23 homers and 72 RBI.

In 2011, Lind was moved to first base, after long-time Jays first sacker Lyle Overbay moved to the Pittsburgh Pirates. Never known for his defensive prowess, Lind surprised observers by how well he adapted to the position: he showed excellent footwork at the bag, a strong and accurate arm, and an ability to dig the ball out of the dirt was a boon to the Jays' infield defense. He also hit significantly better than in 2010, benefiting in part by the outstanding first half by Jose Bautista, who usually hit third while he batted clean-up. Opposing teams would pitch around Bautista, especially with men on base, giving Lind additional opportunities to drive in runs, which he cashed in. He played 125 games after missing some time in the second half, and hit .251/.295/.439. The very low OBP was a disappointment, but his 26 homers and 87 RBI from the heart of the order were welcomed.

On April 20, 2012, Lind showed more of his defensive prowess at first base, starting only the fourth triple play in Blue Jays history, against the Kansas City Royals. With runners on first and second, he snagged Eric Hosmer's line drive, stepped on the bag for the second out and relayed to shortstop Yunel Escobar before Alex Gordon could react for an easy triple killing. However, if his defense was fine in the early going, his offense was a problem. On May 17th, he was sent down to AAA Las Vegas after hitting .186 and slugging .314 in 34 games. Yan Gomes was called up to replace him, with Edwin Encarnacion taking over at first base for the time being. He was then placed on waivers a short while later to free a spot on the Jays' major league roster, and going unclaimed, continued to attempt to work out of his problems in Las Vegas. Whatever was ailing him in the big leagues did not affect him in the Nevada desert, however, as he hit .392 with 10 doubles and 8 homers in 32 games, punching his ticket back to Toronto. He ended the year with a .255 average in the major leagues, in 93 games, with 11 homers and 45 RBIs.

Adam bounced back with a solid season in 2013 when he played 143 games for Toronto, slugging 26 doubles and 23 homers, scoring and driving in 67 runs. he split his time almost equally between first base and the DH role, usually switching roles with Edwin Encarnacion, who had emerged as one of the top sluggers in the major leagues in the interim. The usage pattern continued in 2014, although he tended to be benched altogether when the team was facing lefthanders. He hit very well when he played, though, as attested by his .320 average after 61 games, even though he had only 4 homers. On July 9th, he suffered a non-displaced fracture in his right foot, however, and had to be placed on the disabled list, with a prognosis of six to eight weeks before a return to the line-up. He had originally fouled a ball off his foot on June 14th, although he was only diagnosed with a bone bruise at the time and attempted to play through the pain. He came back on August 12th and finished the season with a .321 average in 96 games, with only 6 homers, 38 runs and 40 RBIs however. After the season, the Blue Jays decided to part ways with their long-time first baseman, trading him to the Milwaukee Brewers on November 1st, in return for P Marco Estrada.

While the Brewers were swept at home by the Colorado Rockies in their first three games of 2015, it was no fault of Lind's: he went 6 for 10 with 3 walks, 2 doubles and a homer over the series. He made it 9 hits over the team's first 5 games, tying Paul Molitor and Dave Parker for the team record for most in such a span. He was one of the team's best hitters all year, with a .277 average, 32 doubles, 20 homers and 87 RBIs. He did struggle against lefties however, hitting .221 with few other skills. On December 9th, the Brewers traded him to the Seattle Mariners in return for three minor leaguers, Carlos Herrera, Daniel Missaki and Freddy Peralta.

On July 8, 2016, he hit a dramatic home run as a pinch-hitter for the Mariners. The M's had been shut out on one hit by Chris Sale of the Chicago White Sox through the first 8 innings and were trailing 3-0 coming into the bottom of the 9th against closer David Robertson. Franklin Gutierrez started a dramatic rally with a lead-off single, but was forced out by Robinson Cano; Nelson Cruz drew a walk but Dae-Ho Lee struck out. However, Kyle Seager singled to make it 3-1 and Lind followed as a pinch-hitter for C Chris Iannetta. He hammered a 0-1 pitch over the wall in right center at Safeco Field for a walk-off 4-3 win. He was the Mariners' most used first baseman that year, sharing time with Korean rookie Dae-ho Lee, hitting .239 in 126 games, but with 20 homers and 58 RBIs.

Lind became a free agent after the 2016 season and signed a contract with the Washington Nationals just as spring training was about to get under way in 2017. In his first plate appearance of the year on April 3rd, he hit a two-run pinch homer in the 7th inning off David Phelps of the Miami Marlins that put the Nats ahead, 3-2, sending them on to a 4-2 win on opening day. It was a harbinger of a very successful season, during which he hit .303 with 14 homers and 59 RBIs in 116 games. He filled in at first base and in left field, and also played DH in interleague games on the road. He played in the postseason for the first time, going 2 for 3 as a pinch-hitter in the Division Series against the Chicago Cubs. He became a free agent after the season and was one of a large numbers of experienced major leaguers who took a very long time to find a new team before the 2018 season. On March 2nd, he agreed to a minor league deal with the New York Yankees, who were looking for some insurance at first base in case the injury-prone Greg Bird was once again to miss big blocks of playing time as he had the previous two seasons. However, he was released on March 14th, but after being without a team for a month, he re-signed with the Yanks on April 18th following yet another injury to Bird. He was assigned to the AAA Scranton/Wilkes-Barre RailRiders. He ended up playing 71 games in the minor leagues that season, also spending time with the Tampa Tarpons on a rehabilitation assignment and with the Pawtucket Red Sox, the AAA affiliate of the Boston Red Sox. He hit .245 with 11 homers and 46 RBIs but never got the call back to the Show and retired after not finding a team wishing to take him on board for the 2019 season. 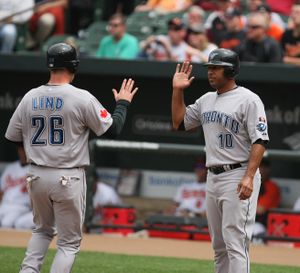