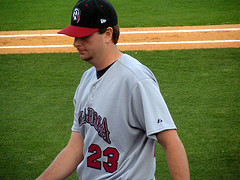 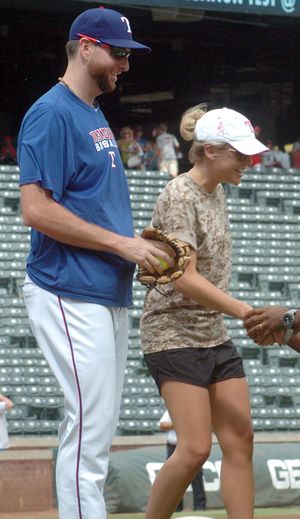 Scott Feldman was drafted in the 30th round of the 2003 amateur draft by the Texas Rangers. He was signed by scout Tim Fortugno and made his pro debut that summer.

Feldman saw limited action his first two seasons in baseball due to Tommy John surgery. He was 1-1 with a 4.26 ERA in three games for the 2003 AZL Rangers, fanning seven and allowing four hits in six and a third innings. He pitched four games in the Arizona League the next year, allowing no runs, two hits and walk, fanning five in seven innings.

Feldman began 2005 with the Bakersfield Blaze and allowed two unearned runs in nine innings, saving three of his six games and striking out 11 while allowing five hits. Promoted to the Frisco Rough Riders, Scott allowed a .202 average in 46 relief appearances. He led the team with 14 saves, went 1-2 and had a 2.36 ERA. He walked 23 and fanned 41 in 61 innings and got a cup of coffee with Texas, having a 0.96 ERA in 8 relief spots.

Feldman allowed 12 runs in a start on August 12, 2008, as Texas lost a 19-17 decision to the Boston Red Sox. It had been over 90 years since Gene Packard was the previous big leaguer to give up 12 runs and not take the loss.

Feldman signed as a free agent with the Chicago Cubs for the 2013 season. Inserted in the team's starting rotation, he pitched his first career complete game on May 1st, when he defeated the San Diego Padres, 6-2. he also fanned a career-high 12 batters and had an RBI double that day. He continued to pitch well, compiling a record of 7-6, 3.46 in 15 starts for the struggling Cubs. On July 2nd, he was traded to the Baltimore Orioles in return for Ps Pedro Strop and Jake Arrieta. He won his first game for his new team on July 14th when he defeated the Toronto Blue Jays, 7-4, in the last game before the All-Star break. He went 5-6, 4.27 in 15 starts for the Orioles, for a combined record of 12-12, 3.86 in 30 starts, pitching 181 2/3 innings and striking out 132 batters.

A free agent after the season, he signed a three-year deal with the Houston Astros, with the mission of having to anchor a starting rotation that was dismal in 2013. His first assignment for his new team was as the Astros' 2014 opening day starter, facing the New York Yankees on April 1st. He did very well, holding the Yankees scoreless over 6 2/3 innings to gain credit for a 6-2 win that snapped a 15-game losing streak by the Astros, dating back to the previous season. On August 30th, he recorded his second career shutout, a three-hit, 2-0 victory over his old team, the Rangers. he went 8-12, 3.74 in 29 starts that season, pitching 180 1/3 innings as one of the most consistent pitchers on the Astros' staff. In 2015, however, injuries limited him to 18 starts and a record of 5-5, 3.90. The Astros managed to make it to the postseason, but Scott was not available to pitch. In 2016, he was no longer a member of the starting rotation, as he made only 5 starts in 26 appearances on the mound for Houston. He was effective during these, though, as his record was 5-3, with an ERA of 2.90 in 62 innings. On August 1st, he was traded to the Toronto Blue Jays in return for minor leaguer Lupe Chavez. Because the Jays were visiting Houston that day, he was able to make his debut with his new team immediately. It was not storybook, however, as he was called in to pitch the 14th inning with the score tied, 1-1 and promptly gave up a single to Jose Altuve and a double to Carlos Correa to be charged with the loss. He earned his first win as a Jay on August 16th when he relieved an ineffective Marco Estrada after a rain delay at New Yankee Stadium and pitched well for three innings, benefiting when his teammates exploded for 8 runs in the 8th inning to earn a 12-6 win. However, in 14 appearances for the Jays, he was only 1-2 with an ERA of 8.40 and was not put on the postseason roster. He became a free agent after the season and signed a one-year deal with the Cincinnati Reds.

In 2017, he was one of the few veterans on a very young Reds pitching staff although Bronson Arroyo, attempting a comeback at 40, was even older. On May 7th, he showed the kids hows it's done, however, when he pitched a complete game, four-hit shutout to defeat the San Francisco Giants, 4-0. It was his first shutout since 2014.