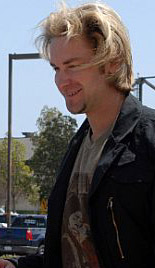 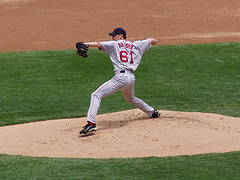 Pitcher Bronson Arroyo was born in Key West, FL, and in high school was All-State in baseball as well as being a star at basketball. He was in the minors from 1995 to 1999, as well as large parts of the 2000 to 2003 seasons. While in the Pittsburgh Pirates' organization, he was 12-4 for the Lynchburg Hillcats in 1997, 15-4 for the Altoona Curve in 1999, and spent parts of three seasons with the Nashville Sounds, going 8-2, 6-2, and 8-6. In 2003, after having been selected off waivers by the Boston Red Sox, he was 12-6 with the Pawtucket Red Sox. On August 10 that season, he threw a perfect game against the Buffalo Bisons. It was just the fourth nine-inning perfecto in the history of the International League.

From 2000 to 2002, Bronson spent part of each season in the majors with the Pittsburgh Pirates, with his ERA gradually improving each year. His major league debut came as not as a pitcher, but as a pinch-hitter, facing the Atlanta Braves on June 12, 2000. He hit for Scott Sauerbeck against Bruce Chen in the bottom of the 6th, with the Pirates leading 8-6. He had just been called up from the minors and did not expect to play that day, so he was not wearing his cleats. Sporting sneakers, he worked a full count against Chen before hitting a comebacker back to him. He made his pitching debut the next day as a starting pitcher, giving up 5 runs in 5 innings against the Braves but ending up with a no-decision. He was with the Boston Red Sox for a small part of 2003, as well as all of 2004 and 2005, going 10-9 in 2004 and 14-10 in 2005. He pitched in the postseason all three years, including two relief appearances in the 2004 World Series against the St. Louis Cardinals, when the Red Sox won their first title since 1918.

Arroyo was traded at the beginning of the 2006 season to the Cincinnati Reds for Wily Mo Pena. The trade was one of the biggest early successes for rookie Reds General Manager Wayne Krivsky, as well as rookie owner Bob Castellini, and the Reds experienced perhaps their most exciting season since 1999. I n Bronson's first at bat as a Cincinnati Red, he hit a home run against Glendon Rusch of the Chicago Cubs in Cincinnati. Bronson repeated the feat, again against Rusch, a week later at Wrigley Field. Both home runs were hit off fastballs Rusch left over the plate. That season, he was selected to his first All-Star Game where he pitched one scoreless inning. At the time of the game, he had 9 wins. It would take 11 more starts for him to get to double digits in pitcher wins. He finished the season with 14 victories while leading the National League in innings pitched and games started. He won the Joe Nuxhall Good Guy Award given by the Cincinnati media that season. 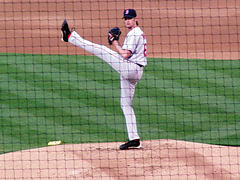 Bronson won 15 or more games during three consecutive seasons with the Reds from 2008 to 2010, and pitched over 200 innings in 8 of 9 seasons starting with his 2005 season in Boston; the only exception during that span was 2011, when he pitched 199 innings. While his ERA during that span was not particularly impressive, his ability to never miss a start and pitch deep into games while putting his team in a position to win made him a very valuable pitcher. He returned to the postseason in 2010, starting Game 2 of the NLDS against the Philadelphia Phillies. He left after 5 1/3 innings with the Reds in the lead, but they eventually lost, 7-4. He also started Game 2 of the 2012 NLDS against the San Francisco Giants and pitched brilliantly, giving up zero runs and only one hit in 7 innings; the Reds won that game, 9-0, to go two games up on the Giants, then proceeded to lose the final three games of the series without his getting another chance to pitch.

Arroyo moved to the Arizona Diamondbacks as a free agent in 2014, after 8 seasons with Cincinnati. He was one of the few bright lights for the last-place D'backs, as he went 7-4 with a 4.08 ERA in his first 14 starts. His last start came on June 15th, as he had to undergo Tommy John surgery and was out for the remainder of the season and the start of 2015. He was still attempting to come back when, on June 20th, he was traded to the Atlanta Braves (along with pitching prospect Touki Toussaint) for utility man Philip Gosselin, who was also on the disabled list at the time. The deal was motivated by economic reasons, as Arroyo was owed $9.5 million in salary. Indeed, Bronson never actually took the mound for the Braves and on July 30th moved again in another deal motivated by financial considerations, this time to the Los Angeles Dodgers, in another multi-player swap. The others involved in the deal were pitchers Luis Avilan, Jim Johnson and Alex Wood and infielder Jose Peraza, going to L.A., with Héctor Olivera Jr., Paco Rodriguez and Zachary Bird headed to Atlanta. He did not pitch for the Dodgers either.

Arroyo became a free agent after the 2015 season, and while there was much speculation the Reds were interested in bringing him back, it was with the Washington Nationals that he landed, signing a minor league deal with an invitation to spring training on January 26th. Even though he was only a month away from his 39th birthday, he was not ready to turn his back on the game just yet. But things did not go as planned, as he was scratched from a scheduled spring training start with a shoulder problem that turned out to be a torn labrum, a likely career-ending injury. Just as epitaphs of his career were being published, an incredible piece of news came on March 18th: the doctor charged with reading his MRI had made a mistake, misreading a small inflammation as a major tear. The new prognosis was only for seven to ten days of rest. It did not go quite that well, as elbow problems prevented him from pitching at all that season except for a couple of rehabilitation starts with the GCL Nationals.

Still, he decided to give baseball one final shot in 2017, receiving a stem cell injection from Dr. James Andrews. And, lo and behold, he made the Reds' starting rotation out of spring training. His return to the mound came on April 8th, but he was charged with a loss against the St. Louis Cardinals, allowing 6 runs on 6 hits in 4 innings. After losing his first two starts, he won three games and in mid-May was 3-2, 5.94, the 11 runs he had allowed in 10 innings in his first two start still leaving his ERA mediocre. He began to show his age after that, as he was winless over his next seven starts, suffering four losses and seeing his ERA shoot up to 7.35 with a loss to the Los Angeles Dodgers on June 18th in which he allowed 5 runs in 3 innings. At that point, there were rumors the Reds were about to cut him loose, which would likely end his career. Instead of being released, he was placed on the disabled list the next day, as it was revealed that he had been bothered by a sore shoulder for six weeks (coinciding with the time he had begun to lose effectiveness). He announced his retirement on September 24th, one night after being honored by the Reds with a 'Kickin' It With Bronson' night, which ended with him and his band performing Pearl Jam covers in a postgame concert.

Arroyo was named after actor Charles Bronson. This Bronson was dubbed the "poor man's El Duque" because of their similar unusual delivery as well as their similar approaches to pitching. Bronson relied mostly on his sweeping curveball and his fastball which averaged from 88-92 MPH. He also had a very idiosyncratic pitching motion in which he raised his left leg very high before stepping towards the batter and delivering the ball.

Away from the diamond, he is a musician; his first CD Covering the Bases came out in July 2005. The disc contains twelve cover songs, including covers of The Verve Pipe's "The Freshmen" and Alice in Chains' "Down in a Hole". The advertising for his CD says: "After the 2004 World Series won by the Red Sox, Bronson teamed up with music producer Loren Harriet and music executive Lou Mann to create a twelve-song album featuring cover songs that Arroyo would play for his teammates." Because of Bronson's personality, his unusual hair styles, and his musicianship, Bronson became a fan favorite. Bronson's musical tastes, as well as his performances revolve mostly around 1990s grunge music. Bronson's favorite group is Alice in Chains. In 2012, Arroyo performed a cover of Adam Sandler's "Red Hooded Sweatshirt" with accompaniment from Aroldis Chapman. Perhaps because of his status as a musician, Arroyo has his own website (see below). He also has an extensive Wikipedia entry.