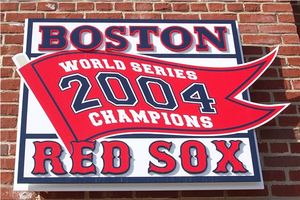 For fans of the Boston Red Sox, the 2004 World Series was surely memorable. For the rest of the world, it was a bit disappointing; maybe even anticlimactic. Baseball's most legendary curse fell without a fight, without a grappling moment. The St. Louis Cardinals never led in the series, and Boston easily strolled to its first World Series title since 1918.

The Cardinals were appearing in their first World Series since 1987. Manager Tony LaRussa was seeking to land his first title since 1989. America hardly noticed these aspects of the 2004 Fall Classic. In a series featuring two baseball-crazed towns, it was Boston that got all of the attention. The Red Sox had erased a 3-0 deficit in the ALCS to reach their first World Series since 1986. The spotlight was not on the team from the banks of the mighty Mississippi, but on the legendary curse that had plagued the Red Sox for almost a century.

So in a series featuring some of the league's biggest stars, such as David Ortiz, Manny Ramirez, Pedro Martinez, Albert Pujols, and Scott Rolen, the individuals were overshadowed by the game's folklore. Every TV set was filled with images of Carlton Fisk willing his home run to stay fair, and of a ball rolling between Bill Buckner's legs. Would it be a series about redemption or continuation? Would the curse fall or strike again? The answers came quickly and unequivocally: this was a new century, and the best team won handily.

The Boston Red Sox were as balanced as any team in baseball. The team clubbed 222 dingers and scored 949 runs. They had a star catalyst at the top of the order, Johnny Damon, plus the duo of Manny Ramirez and David Ortiz in the middle. Jason Varitek, Kevin Millar, Mark Bellhorn, and Bill Mueller were all quality hitters as well. Each provided a solid average and moderate power. The Red Sox did not steal bases, and the organization's philosophy preached patience, not aggression.

The starting rotation was experienced and reliable. Pedro Martinez was beginning to show his age, but still won 16 games during the regular season. Curt Schilling was a 21-game winner and led the staff with a 3.26 ERA. Tim Wakefield and Derek Lowe were steady veterans, but could not dominate quite like Martinez and Schilling. Keith Foulke served as the Red Sox closer and was excellent in the role.

Like Boston, the strength of the St. Louis Cardinals' offense was its balance. Albert Pujols, Scott Rolen, and Jim Edmonds provided plenty of power in the heart of the order. Each hit over .300 with 30+ home runs and 100+ RBIs. Tony Womack had a superb season as the Cardinal's lead-off hitter, and Edgar Renteria was a steady contributor in the bottom half of the lineup. Veterans Larry Walker and Reggie Sanders provided extra pop.

The Cardinals' rotation lacked the dominating front men that the Red Sox had in Martinez and Schilling. Jason Marquis, Matt Morris, Jeff Suppan, and Chris Carpenter each won at least 15 games, but did not look particularly strong in doing so. Carpenter led the way with a 3.46 ERA, but he did not start any World Series games. Jason Isringhausen led the National League with 47 saves.

Boston native Stephen Tyler, lead singer of legedendary rock band Aerosmith, ushered in the 2004 World Series with his rendition of the "The Star Spangled Banner". The 1st inning went well for the Red Sox who took a quick 4-0 lead. Johnny Damon led off the inning with a double. Woody Williams hit the next batter, Orlando Cabrera, and then got Manny Ramirez to fly out. David Ortiz picked up the pieces with a three-run homer. Kevin Millar followed Ortiz's blast with a double, and was driven home on a Bill Mueller single.

A heads-up play by Jim Edmonds earned the Cards their first run of the game. The infield shifted to the right and Edmonds dropped a bunt down the left side of the infield. No Red Sox player was in position to field the ball, making the bunt an easy single. A walk and a sacrifice bunt put Edmonds at third for Mike Matheny. The defensive-oriented catcher hit a sacrifice fly to put St. Louis on the board. The Cardinals chipped away at the lead again in the 3rd inning, this time with a home run from Larry Walker. But the Red Sox stormed right back. A slew of walks and singles surrendered by Williams and Dan Haren gave Boston three more runs, and a 7-2 lead.

The Cards fought bravely and capitalized on Tim Wakefield's poor control. The knuckleball pitcher walked four batters before being relieved by Bronson Arroyo, who gave up an RBI single. St. Louis tacked on three runs to get back within two, at 7-5. They tied the game in the 6th inning on a So Taguchi single and a pair of doubles from Edgar Renteria and Walker.

Poor luck came up to bite the Cardinals in the 7th, literally. With one run already home, and runners on first and third, Ortiz hit a ball sharply to 2B Tony Womack. The ball hit him and allowed Cabrera to score easily. Womack left the game. Down 9-7, St. Louis went to work on another comeback. Three hits and two errors allowed two runs to score, evening up the game at 9-9. Mark Bellhorn came to Boston's rescue with a two-run home run in the bottom of the 8th. Up 11-9, Keith Foulke finished off the Cards in the top of the 9th.

Curt Schilling had pitched through the ALCS on pure grit, and he now looked to give the Red Sox a two-game lead in the World Series. For the second straight start, Schilling had an operation to pin down a ligament in his ankle. Just like in the ALCS, the wound from the procedure produced a bloody stain on his sock. The Cardinals had two-time All-Star Matt Morris on the mound. For the second straight night, Boston struck early. Consecutive walks to Manny Ramirez and David Ortiz turned into runs when Jason Varitek hit a triple to center field. The Red Sox took a 2-0 lead and never looked back.

The Cardinals scored in the 4th inning on an error by Boston's third baseman, Bill Mueller. Unlike Game 1, the Red Sox did not allow St. Louis to tie the game. Instead, Schilling buckled down and held the Cards scoreless for the remainder of his six-inning outing. Boston's offense provided more cushion in the bottom of the 4th, scoring two runs on a hit by pitch and consecutive doubles from Mark Bellhorn and Mueller. The Red Sox scored two more runs in the 6th inning by bunching together four singles. The Red Sox had a 6-1 lead and were well on their way to running the Cardinals out of Boston.

The second St. Louis run of the night came on a sacrifice fly off the bat of Scott Rolen. Keith Foulke pitched another scoreless 9th inning to secure the victory. The Red Sox had used the home field in their favor, and taken a two games to none lead in the series. Schilling's bloody sock from Game 2 was put on display in the Hall of Fame as part of the Red Sox World Series exhibit. In 2013, it would be sold at auction for $92,000 to recoup some of Schilling's debts from a failed business venture.

Pedro Martinez will go down in history as one of the best pitchers of his generation. All his career lacked was a World Series title. He helped his own cause in Game 3 of the 2004 Fall Classic, pitching seven scoreless innings en route to his first World Series win. The weather in St. Louis was much warmer than it had been in Boston, adding a new dynamic to the series. The results were unchanged. Not even the first pitch duo of Stan Musial and Bob Gibson could derail the Red Sox.

For the third straight game, Boston opened the scoring in the 1st inning. This time, it was a Manny Ramirez home run that put the Red Sox ahead, 1-0. Pedro's dominance left the Cardinals without an answer. The trio of Albert Pujols, Scott Rolen, and Jim Edmonds combined to go 1 for 10 with three strikeouts and a walk.

Boston scored their second run of the night in the 4th inning when Trot Nixon hit a single that drove in Bill Mueller. The wheels fell off for St. Louis starter Jeff Suppan in the 5th inning. The righty gave up a lead-off double to Johnny Damon, followed by singles from Orlando Cabrera and Ramirez. Mueller added an RBI single later in the inning. Desperate to stop the bleeding, Tony LaRussa pulled the plug on Suppan and brought in Al Reyes. After five innings, the Red Sox had a comfortable 4-0 lead.

After the Red Sox's rally in the top of the 5th, the game went scoreless into the 9th frame. Kiko Calero, Ray King, and Julian Tavarez provided solid relief for the Cardinals, while Mike Timlin pitched a scoreless 8th for Boston. Larry Walker broke up Boston's shutout bid with a home run off Keith Foulke in the 9th. It was too little too late for St. Louis. The Red Sox were licking their chops for a sweep.

Derek Lowe's career with the Red Sox had vacilated between brilliance and mediocrity. He had wonderful seasons and terrible seasons. 2004 was one of the terrible seasons, but true to form, he balanced it out with success. Lowe made his first-ever World Series appearance in Game 4, and he delivered a masterpiece. He was pitching for a contract, the gem probably earned him a few million dollars extra. But for that one night, contracts meant nothing to the Red Sox faithful. Lowe delivered the team's first World Series title this side of World War I.

A full lunar eclipse graced the sky, just in case the series did not already have enough cosmological meaning. Under the darkened moon, Johnny Damon gave the Red Sox their fourth 1st-inning lead in as many games. His lead-off home run put the Red Sox ahead for the last time. There was no stopping Lowe. He followed in the shoes of Pedro Martinez and pitched seven innings of shutout baseball. He yielded only three hits and walked just one.

The Cardinals added insurance in the 3rd. Manny Ramirez was thrown out at home on a fielder's choice early in the inning, but Trot Nixon made up for it with a two-run double. Boston had a 3-0 lead after three innings.

In the game's final inning, Albert Pujols tried to start a rally with a single off Keith Foulke. Foulke recovered quickly, retiring Scott Rolen and Jim Edmonds. That brought up Edgar Renteria, the hero of the 1997 World Series. Renteria hit the ball on the ground to the right of the pitcher's mound. Foulke scooped it up and tossed it to back-up first baseman Doug Mientkiewicz. The Red Sox celebrated on the field and the city of Boston went wild. The curse was over.

Amusingly, the final game ball caught by Mientkiewicz to record the final put-out would become a bone of contention between Mientkiewicz, who considered that it was his personal property, and the Red Sox, who saw it as a souvenir that belonged to Red Sox nation as a whole. He claimed that this baseball would help fund the education of his children (even though he had already made millions from his baseball earnings). Eventually, he agreed to "loan" the ball to the Red Sox. 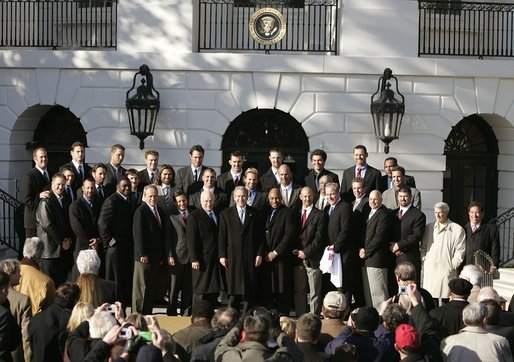