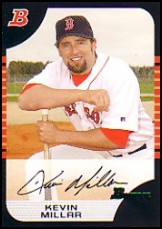 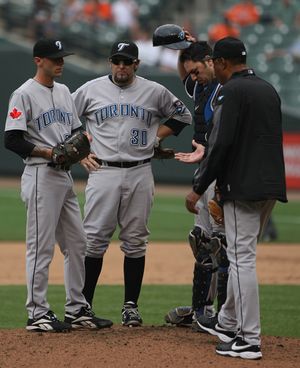 Kevin Millar was an above-average hitter with moderate power who has played nine seasons in the major leagues, mostly at first base and in the outfield.

The nephew of Wayne Nordhagen, Kevin Millar got his start in professional baseball when he played for the St. Paul Saints of the independent Northern League in 1993 after failing to be selected in the 1993 amateur draft.

He signed as a free agent with the Florida Marlins in 1993, when they were a brand new team. Although he hit quite well, and with power, in the minors, he didn't reach the majors till 1998. He was an All-Star in the Midwest League in 1994, and he was the MVP in the Eastern League in 1997. He was a replacement player in 1994, during the strike.

He only played two games in the major leagues in 1998, as he was injured in the second game he played. He spent a month in Calgary in 1999 before coming up for good to the majors. His best year was 2001 with the Marlins when he slugged .557.

Prior to the 2003 season, Millar was about to go to Japan to play for the Chunichi Dragons before the Boston Red Sox claimed him off waivers, breaking a longstanding "unwritten rule" in the relationship between between U.S. and Japanese baseball. A controversy ensued, but Millar stayed in the United States when the Red Sox gave Florida cash compensation and the Marlins returned the money the Dragons had paid them for Millar.

In Boston, Millar came to set the clubhouse tone for the 2003 Red Sox team that came within a game of the World Series, coining the term "Cowboy Up" as the squad's rallying cry in what would be Boston's finest season since 1986.

Returning as a member of the 2004 World Series champion Red Sox team in 2004, Millar had another productive regular season, and drew a critical walk against Mariano Rivera late in Game 4 of the American League Championship Series. After Millar got to first, Dave Roberts entered the game for him as a pinch runner and proceeded to swipe second base with one of the most famous steals in baseball history. The following batter, Bill Mueller, singled Roberts home from second to tie the game, sparking the Red Sox to eventually come back from a three games to none deficit in the ALCS against the New York Yankees. In the 2004 World Series against the St. Louis Cardinals, Millar batted 5th in Game 1, 6th in Game 2, and then pinch-hit in the two games in St. Louis.

When Millar left the Red Sox after the 2005 season, a reporter for the Boston Globe commented: "Regardless of what you might have thought of him as a player, a lot of the fun just seeped out of the Red Sox clubhouse."

In 2006, he played first base and DH for the Baltimore Orioles, and hit .272 in 132 games after a slow start. He was mentioned in trade rumors prior to the trading deadline that season, but returned to Baltimore in 2007 in 2008 before ending his career with the Toronto Blue Jays in 2009.