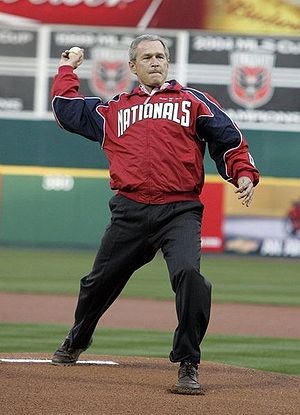 George W. Bush was United States President from 2001-2009, and minority owner of the Texas Rangers from 1989-1998. He is the eldest son of United States President George Herbert Walker Bush. Bush was often seen as the public face of the Rangers ownership group. His political connections and acumen helped the Rangers land public funding for building The Ballpark at Arlington, which is now known as Ameriquest Field. He was the governor of Texas from 1995 to 2001, and was elected the 43rd President of the United States in 2000. He was reelected to a second term in 2004.

It has been said that he once angled for the position of Commissioner of Baseball.

As President, he remained an ardent fan of baseball, often throwing out the first pitch at games, weighing in on steroid issues, and hosting Little League baseball teams at the White House.

His day-to-day involvement with the Texas Rangers lasted until 1994, and thus overlapped with the 1992-1994 period in which Jose Canseco was on the team. Rafael Palmeiro was also on the team through 1993. Canseco's book Juiced claims that Bush must have known about players using steroids. Bush has denied knowing about any steroid use.

Bush threw out the first pitch before Game 3 of the 2009 Japan Series. He had previously performed that honor at Game 3 of the 2001 and 2010 World Series. In retirement, he was asked to do so again at Game 5 of the 2017 World Series in Houston, TX, where he was accompanied by his father, George H. W. Bush, known to be an ardent fan of the Houston Astros.