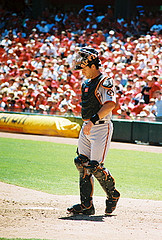 Mike Matheny was a poor-hitting catcher who was outstanding defensively, however. He won four Gold Gloves during his career. He went a full season without committing an error in 2003. He retired from playing when his doctor refused to give him medical clearance following a concussion that made him miss the last four months of 2006. He became a minor league instructor in the St. Louis Cardinals organization and on November 13, 2011, was named to replace Tony LaRussa as the club's manager in 2012. He defeated five other finalists for the job, but was given huge shoes to fill, given LaRussa's tremendous managerial record, capped by a World Series title two weeks earlier.

In spite of his lack of managerial experience, Matheny had a very solid season in 2012, overcoming the loss of Albert Pujols through free agency, and P Adam Wainwright and 1B Lance Berkman to early-season injuries. The team started slowly but played better as the year advanced, finally making the postseason as the second wild card team in the National League. The Cards then defeated the Atlanta Braves in the first-ever National League Wild Card Game and upset the Washington Nationals in the NLDS, 3 games to 2, thanks to a late-inning comeback in Game 5. The Cardinals then took a three-game to one lead over the San Francisco Giants in the NLCS, but the Giants' pitching then took control of the series, and the Cardinals' second-consecutive Cinderella season came to an end, with Matheny earning kudos all around for his leadership.

The St. Louis Post-Dispatch reported shortly after Matheny's hiring that he was in serious financial straits, having lost nearly $4 million on a land development deal in the suburbs of St. Louis, MO whose value collapsed with the crash of the real estate market. He lost his lavish home after being unable to make interest payments on the loans he had taken out to finance the deal, and his case was heading to the Missouri Supreme Court to decide the matter of how much personal property banks could repossess when such business loans faltered. The bank sued to recover some of the $12 million it had advanced to Matheny and his business partner; a St. Louis County judge ruled against him in January of 2013, putting him on the spot for a large financial loss. Matheny explained however that he was not suffering "financial woes" because of the business loss, having relied on the support of family and friends to move on and that the issue had not affected his job performance in any way.

Matheny did another good managing job in 2013, integrating youngsters such as Matt Carpenter, Matt Adams and Shelby Miller into the team as regulars and coming out on top of a tough battle with the Pittsburgh Pirates and Cincinnati Reds to win the NL Central title. He made a couple of bold moves in the postseason, sitting down closer Edward Mujica in favor of youngster Trevor Rosenthal and using raw rookie Michael Wacha in place of Miller as his number 2 starter. Those paid off as the Cards managed to outlast the pesky Pirates in the NLDS, and then defeat the Los Angeles Dodgers in the NLCS to reach the 2013 World Series. There, the Cardinals won two of the first three games over the Boston Red Sox but eventually lost the series in six games. Still, it was a very successful season, and Matheny was rewarded for his good work with a three-year contract extension.

Matheny again took the Cardinals to the NLCS in 2014, but was again defeated by the Giants, who went on to win their third World Series in four years. In 2015, he again rose to the challenge of not having his ace pitcher, Adam Wainwright, available for most of the season. He also had to overcome the tragic off-season death of top youngster Oscar Taveras, and in site of this led the Cards to the best record in the major leagues. It was not easy, as their top two division rivals, the Pirates and Chicago Cubs were snapping at their heels all year. He was particularly successful in integrating youngsters such as pitcher Carlos Martinez and OFs Randal Grichuk, Stephen Piscotty and Tommy Pham into the mix, working around injuries to key players such as 1B Matt Adams and OF Matt Holliday. However, the Cardinals were unable to get out of the first round of the postseason that year, being upset by the Cubs in the Division Series.

The 2016 and 2017 seasons were both disappointments, because while the Cardinals played above .500 both years, they also missed the postseason twice, falling behing the eventual World Champions, the Cubs in 2016, and then the Cubs and the emerging Milwaukee Brewers in 2017. They were expected to compete for a division title with those two teams in 2018 but after a decent enough start, they began to lost ground and as the All-Star break was around the corner, they were battling to stay above .500 and were closer to the 4th-place Pittsburgh Pirates than to the two front-runners. There were rumors of dissension in the clubhouse and the offence was badly underperforming, but still the club brass's decision on July 14th to fire Matheny with one game left before the break took most observers by surprise, given how respected a figure he had become around baseball. He was replaced on an interim basis by bench coach Mike Shildt and his two hitting coaches, John Mabry and Bill Mueller, were fired along with him.

In November 2018, Matheny joined the Kansas City Royals as a special adviser for player development. There was immediate speculation that he was being groomed to succeed Ned Yost as manager, given that Yost would likely not continue as skipper after 2019. Indeed, Yost retired at the end of that season, and on October 31st, the Royals announced Matheny's hiring as his successor starting in 2020. However, his three-year tenure was not successful, as the team never came close to playing .500 ball and finished in fourth place twice and fifth once. The writing was on the wall for him when the Royals' ownership dismissed team President Dayton Moore, the man who had hired him, in September, and his firing was announced right after the Royals played their last game of the 2022 season on October 5th. Pitching coach Cal Eldred was let go at the same time.

He is the father of Tate Matheny.