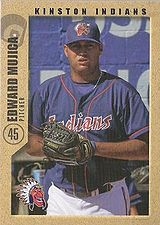 Edward Mujica was signed by scout Luis Aponte for the Cleveland Indians in 2001. He made his pro debut for the San Felipe club in 2002 and came stateside with the Burlington Indians in 2003.

After seven seasons as a nameless middle reliever with five different teams, he was trusted into the role of closer with the St. Louis Cardinals in 2013, after Jason Motte was lost for the season in spring training. He did extremely well in the role, with a record of 2-1, a 2.71 ERA and 37 saves in 65 outings. In 64 2/3 innings, he struck out 46 while allowing only 5 walks, one of them being intentional. He made the All-Star team for the first time. Yet, he lost the confidence of manager Mike Matheny down the stretch, and by the time the postseason rolled around, not only had young Trevor Rosenthal taken over for him as closer, but he was confined to the back of the bullpen, pitching only in non-critical situations. While the Cardinals reached the 2013 World Series, he pitched only twice, for a total of only two innings, in the first two rounds of the postseason, and not at all in the World Series. Seeing the writing on the wall, he left the Cardinals after the season, signing a two-year deal with the Boston Red Sox.

Mujica's first game with the Red Sox, which came during their home opener on April 4, 2014, was a veritable nightmare. Coming in in the top of the 9th with the game tied at 2 against the Milwaukee Brewers, he proceeded to allow a lead-off double to Khris Davis, made on a wrong decision upon fielding Scooter Gennett's bunt, throwing too late to third base, and then gave up a double to Lyle Overbay and a single to Carlos Gomez. He was removed before he could get out of the inning and was charged with the 6-2 loss. He pitched better the rest of the way, making 64 appearances during which he went 2-4, 3.90 with 8 saves. He started the 2015 season with the Red Sox but was designated for assignment on May 8th after starting the year 1-1, 4.61 in 11 games. He was traded to the Oakland Athletics in return for future considerations the next day.