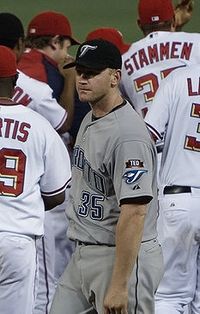 Lyle Overbay has been the regular first baseman for a number of major league teams, including the Toronto Blue Jays.

He played for the University of Nevada, Reno and hit .338 with 85 RBI as a college junior, finishing second in the Big West Conference in RBI and making the All-Conference team as an outfielder. The next year was even better - he led the Big West in average (.420) and doubles (24), drove in 88 (one behind leader Don Price), hit 15 homers and slugged .728. He again made the All-Conference team. He was drafted by the Arizona Diamondbacks in the 18th round at the age of 22 in the 1999 amateur draft.

By 2001, Overbay returned to El Paso and slammed the ball around, hitting .352/.423/.528 with 49 doubles and 100 RBI and being named the Diamondbacks Minor League Player of the Year and Baseball America named him the 8th-best prospect in the league. He led the Texas League in average, hits (187), doubles, sacrifice flies (8, tied with Ken Harvey), intentional walks (11, tied with Jason Lane) and OBP. He made the TL All-Star team at first base though Lane was named MVP. He got a September call-up to Arizona and went 1 for 2. He led all of the minors in doubles and hits that year and tied for second in average.

Lyle kept on crushing the ball in 2002, setting franchise records for average and RBI (109) by hitting .343/.396/.528 for the AAA Tucson Sidewinders with 40 doubles. He played in the Triple-A All-Star Game and the Futures Game. He lost the Pacific Coast League batting title to Rick Short and tied Larry Sutton for the lead in doubles (40). His 87 assists led first basemen. He made the league All-Star team and got another late call-up to Arizona, going 1 for 10. 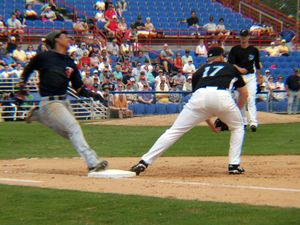 Overbay (wearing #17) tags the base and gets the out for the Jays.

In 2003, Overbay appeared in another 35 games for Tucson, hitting .286/.419/.479 and finished the year with the Diamondbacks for 86 games, hitting .276 without much power. It was his first pro season under .330. He was then included in an eight-player trade to the Milwaukee Brewers.

Overbay had another full season as a regular for the Jays in 2010, hitting only .243 but with 67 RBI in 154 games. Given his extensive playing time, he managed to compile 37 doubles and 20 homers, and because he still drew his share of walks, managed to keep his OPS+ above 100, at 105 - mediocre for a first baseman, but not awful, especially with his good defensive work. However, Toronto did not seek to re-sign him after the season, and he instead moved to the Pittsburgh Pirates in 2011. There he hit only .227 with 8 homers in 103 games, and the Pirates acquired Derrek Lee at the trading deadline to play first base, hoping in vain to keep a .500 record for the first time in eons. Overbay got his walking papers on August 5th and ended up finishing the season back in Arizona, where he hit .286 in 18 games (but only 42 at-bats). Rookie 1B Paul Goldschmidt emerged as a productive hitter for the team down the stretch, relegating Overbay to the bench. He did get to play in the postseason for the first time, going 0 for 4 in the NLDS against the Brewers.

Overbay re-signed with Arizona in 2012, but with Goldschmidt around, there was little playing time to be had for him. He got into 45 games in the season's first four months, compiling 96 at-bats. He did hit .292 and slug .448, but was released on August 5th for the second straight year. He found work with the Atlanta Braves to finish the season, adding another 20 games to his resumé, during which he only went 2 for 20. In 2013, he headed to spring training with the Boston Red Sox hoping to be Mike Napoli's back-up at first base, but lost out to some younger players also vying to make the team; he was released as training camp was winding down on March 26th, but with the end of the line apparently in sight, he landed on his feet, immediately signing with the New York Yankees and being handed the starting first base job with Mark Teixeira on the sidelines for the first month of the season at least. Overbay's opportunity to start at first for the Bronx Bombers extended until the end of May, and he did better than anyone expected, hitting .247 but with 12 doubles, 8 homers and 29 RBI in 51 games. He had in fact played well enough that after Teixeira's return, manager Joe Girardi gave him his first start at a position other than first base on June 3rd, putting him in right field in a game against the Cleveland Indians on May 3rd.

The most similar player through 2007, based on similarity scores, was Nick Johnson, but given Overbay's much better durability, the oft-injured Johnson was no longer a good comparison by 2013, when Alvin Davis and Norm Siebern topped his chart.

Quote: "As soon as Prince Fielder was ready, I knew they'd probably move me." - Lyle Overbay talking about his tenure with the Milwaukee Brewers.