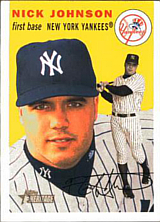 Nick Johnson first played in the major leagues with the New York Yankees in 2000. His strength as a hitter was his ability to get on base, given a decent batting average, a lot of walks, and a tendency to get hit by pitches. He also had some power. Unfortunately, he also seemed to be a magnet for injuries, many of them freakish. In his best season with the bat, 2006, he had an OPS+ of 149 due to an OBP of .428 (110 walks) and a SLG of .520 (23 homers and 46 doubles). Johnson then missed the entire 2007 season after a September 23rd collision with Austin Kearns in which Johnson broke his right femur. But this was far from his only significant injury. 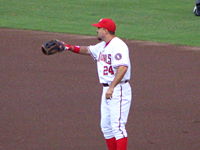 Johnson showed moderate power in the minors. His best minor league season was 1999 with the Norwich Navigators when he hit .345 with 14 home runs. He set an Eastern League record by being hit by pitch 37 times that year, but then missed the entire 2000 season with a wrist injury. He became a regular for the Yankees in 2002, playing 129 games while alternating between first base and DH with Jason Giambi. He hit .243 with 15 homers and 58 RBI, but in 2003 was limited to 96 games by a broken right hand which kept him out of action from late May to mid-July. He improved his batting line significantly, to .284/.422/.472. He played in the World Series that year, going 5 for 17 as the Yankees lost in 6 games to the Florida Marlins. After the season, he was traded to the Montreal Expos along with Juan Rivera and Randy Choate in return for Javier Vazquez. He was installed as the full-time starter at first base in 2004, but was felled by back problems in spring training and only played his first game with the team on May 28th. He hit .251 in 73 games, with 16 doubles and 7 homers, and was getting hot in August when he was felled by a freak bounce on a ground ball by Royce Clayton of the Colorado Rockies on August 20th which broke a bone in his cheek and put him out for the rest of the year.

The Yankees repatriated Nick in 2010, installing him as their designated hitter at the start of the season. Injuries caught up with him quickly, and he was limited to 24 games, during which he hit only .167. He was placed on the disabled list on May 8th with an inflamed tendon in his right wrist and did not return that year. He signed with the Cleveland Indians in 2011, but spent the entire season in the minor leagues; he hit only .201 in 53 games for the Columbus Clippers, precluding a return to the big leagues. In 2012, though, he made the Baltimore Orioles' Opening Day roster. He started off stone cold, going hitless in his first 28 at-bats. He was still only hitting .143 on May 11th when he hit his first homer in over two years, connecting off the Tampa Bay Rays' Joel Peralta in the 7th inning to give Baltimore a 4-3 win and sole possession of first place in the AL East. He suffered a season-ending wrist injury in June, at which point he was hitting .207 with 4 homers and 11 RBI. After the season, he decided to throw in the towel as a result of the endless string of injuries, announcing his retirement on January 28, 2013. In 10 major league seasons and 832 games, he hit .268/.399/.441, with 95 homers and 398 RBI, his biggest asset having always been his ability to get on base combined with decent power.