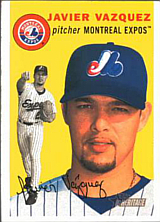 Pitcher Javier Vázquez was selected by the Montreal Expos in the fifth round of the 1994 amateur draft and made his pro debut that year with the GCL Expos, going 5-2 with a 2.53 ERA. He quickly progressed through the Expos system, reaching the majors in 1998. He was a mainstay in the Montreal rotation for the next six seasons, averaging more than 10 wins a year. He bounced from team to team after his Expo tenure, all while accumulating over 2,500 strikeouts.

Vazquez had two back-to-back great seasons in the Expos' organization in 1996 and 1997, going 13-3, 2.68 for the Delmarva Shorebirds of the South Atlantic League followed by 10-3, 1.86 between the Class A West Palm Beach Expos and the AA Harrisburg Senators in 1997. The Expos were starved for pitching at the time and in 1998, took the bold decision of jumping Vazquez all the way to the major leagues when the season started. Javier was only 21 at the time, and most observers thought he was two years away from being ready to pitch in the major leagues.

In this case, results proved that the experts were probably right. Vazquez spent the entire 1998 season with the Expos, but was a dreadful 5-15, 6.06. He did strike out 139 batters in 172 1/3 innings, showing some good stuff in spite of being generally overmatched. He improved significantly in 1999, with a won/loss record of 9-8 in 26 starts, but his ERA was still very high at 5.00. The Expos did send him down to AAA for 7 starts mid-year, and he went 4-2, 4.85 for the Ottawa Lynx, striking out over a batter per inning. 2000 was the first year in which he was unabashedly a major league pitcher. He went 11-9, 4.05 in 33 starts for the Expos, pitching 217 2/3 innings with 196 strikeouts. He followed that with his best season to date in 2001, when he went 16-11, 3.42 in 32 starts. He was the National League Pitcher of the Month in August of that year. He seemed headed for a possible 20-win season when in the Expos' first game after the September 11th attacks, on September 17th, he broke a finger while attempting a bunt against Ryan Dempster of the Florida Marlins; he left the game with a 6-0 lead after 5 innings, but reliever Britt Reames immediately surrendered that lead, giving up 6 runs without retiring anyone in the top of the 6th, and Vazquez ended up with a no-decision. Javier did not pitch again that year, ending the season with 223 2/3 innings pitched and 208 strikeouts. Many commentators noted that the injury was probably the best thing that could have happened to him, as his new manager, Jeff Torborg, was overusing him noticeably: he still had four starts left when the injury occurred, and he had already passed his career highs for innings and strikeouts.

Whether or not it was from overuse the previous season, Vazquez had an off-year in 2002 in spite of the fact that for the first time, he was pitching for a competitive team. Indeed, to everyone's surprise, the Expos, who had been on the brink of contraction following the previous season, who had not been competitive since the first half of the 1997 season, and who were now ownerless wards of Major League Baseball, suddenly were a solid team, led by the bats of All-Stars Vladimir Guerrero and Jose Vidro and the glove of SS Orlando Cabrera. Had Vazquez pitched as well as in his two previous seasons, the Expos might have made made a run for the postseason; instead, he was only 10-13, 3.91 in 34 starts, even though he set a career high with 230 1/3 innings pitched, and the Expos settled for second place in the NL East. He led the National League with 243 hits allowed, a bad sign for a pitcher used to having batters swing and miss at his offerings. In 2003, the Expos' Cinderella story continued; not only did they have another year of playing above .500, they did it with more constraints, including playing a string of "home" games in San Juan, Puerto Rico. Of course, for Vazquez, it was not a negative, since he was coming home, and he had an excellent season, going 13-12 with a 3.24 ERA (139 ERA+) and 240 strikeouts, a personal best that placed him third in the National League. The Expos were in the race for the wild card spot in the NL until early September, when the Florida Marlins pulled away from them while they were hampered by a directive from MLB that prevented them from making a number of September call-ups that would have helped them compete on more equal footing with the Fish (although, the fact that MLB had scheduled a "home stand" in Puerto Rico in early September, depriving the team of any home field advantage at a crucial time in the pennant race, was another key factor that proved impossible to overcome).

After the 2003 season, Vazquez, who was a year away from free agency and could not have been re-signed by the penniless Expos even if he had wanted to stay, was traded to the New York Yankees in return for Randy Choate, Nick Johnson and Juan Rivera. He was an All-Star for the only time of his career, after a strong first half, but overall it was not a happy season in 2004. He went 14-10, 4.91. On August 31st, he was the starter in one of the worst losses in Yankees history, a 22-0 drubbing at the hands of the Cleveland Indians. That cemented his place in the fans' and manager Joe Torre's doghouse. He was shaky in his first two postseason starts, giving up 5 runs in 5 innings to the Minnesota Twins in Game 4 of the ALDS, and then 4 runs in 6 innings in Game 3 of the ALCS against the Boston Red Sox; the Yankees managed to win both times, in spite of his performance, but he lost his turn in the starting rotation and made his last appearance in relief of Kevin Brown in Game 7 of the ALCS on October 20th, allowing another 3 runs to the Sox in 3 innings to complete their historic comeback from three games down and send them to the World Series.

After one year in New York, Vazquez was sent to the Arizona Diamondbacks as part of the deal that brought Randy Johnson to New York. After a season in Arizona, where he was 11-15, 4.42, he was sent to the Chicago White Sox, with whom he had what was his finest season up to that point in 2007 when he went 15-8 with a 3.74 ERA and 213 strikeouts. That year was sandwiched between two mediocre ones, with a record of 11-12, 4.84 in 2006 and 12-16, 4.67 in 2008. He bettered that in 2009, when he finished third in the Cy Young Award vote while pitching for the Atlanta Braves after yet another trade. He was 15-10, 2.87 that year with the Braves. After that season, he was traded for the fifth time of his career, back to the Yankees for a second go-round.

On September 23, 2010 he tied a major league record with 3 hit batsmen in an inning with the Yankees, as part of a season when he was 10-10, 5.32. He became a free agent after the season and ended up with the Florida Marlins. On June 21, 2011, he became the third pitcher since 1900 to pitch shutout ball in 6 or fewer innings while allowing 10 or more hits - the others were Bill Lee in 1974 and Chuck Rainey in 1983. On August 30th, he struck out the 2500th batter of his career in a 6-0 win over the New York Mets. The active major league leader in strikeouts, Vazquez was only the 30th pitcher in major league to reach that total. He started the season poorly, but finished with a flourish, earning National League Pitcher of the Month honors in September when he went 5-0, 0.71. He reached 10 wins for the 12th consecutive season, and had a 29-inning scoreless streak during the month. He finished 13-11, 3.69, but was 10-4, 2.15 after the All-Star break. Still, he spoke of retirement after the season, citing all the years spent toiling on the mound away from his family as a factor that could make him decide to call it quits.

Indeed, Vazquez did not pitch at all in 2012, although he had not formally announced his retirement. After the season, he gave musings about making a return to the big leagues while pitching for the Criollos de Caguas in the Puerto Rican League. Surprisingly, he stated he was leaning towards signing with the Washington Nationals - the successors of his original team, the Montreal Expos - even though they had perhaps the strongest starting rotation in baseball going into the 2013 season. He was named to the Puerto Rican national team's roster for the 2013 World Baseball Classic, bowing out at the last moment, stating he had felt a twinge in the knee on which he had undergone surgery earlier in the off-season. He ruled out a return to the major leagues that year, but did not close the door on a comeback at a later date, although that never happened.