Joe Torre has had a celebrated life in baseball over the past 50 years, both as a player and as a manager. He was a player for 18 years, starting in 1960, and then was a manager for most of 30 years, from 1977 to 2010. He then became Major League Baseball's vice-president for on-field operations and chief baseball officer, serving (as of 2019) since 2011.

He began his career with the Eau Claire Bears of the Northern League, where he led the circuit in hitting. This earned him a call up to the Milwaukee Braves at the end of the 1960 season. He was several years younger than his brother Frank Torre, who at that time was in his fifth season with the Braves. Torre's father, Joe Sr., was a scout for the Braves (1955-1961) and Baltimore Orioles (1962-1971).

Joe started 1961 with the Louisville Colonels of the American Association but by season's end he was in Milwaukee for good. Torre played catcher and first base for Milwaukee and the Atlanta Braves until he was traded to the St. Louis Cardinals for Orlando Cepeda in 1969. 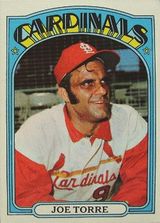 Torre played six seasons in St. Louis where he was named to four All-Star teams, in addition to his five All-Star appearances as a Brave. He also led the National League in hitting and RBI in 1971 en route to the MVP Award. Joe once had a hitting streak of 22 games in April - this was the record for the month until Andre Ethier broke it in 2011, Ethier having once been managed by Torre. An aging Torre was dealt to the New York Mets after the 1974 season. He never regained his All-Star form, but the Mets gained an able third baseman and, eventually, a manager. In 1977, the Mets fired Joe Frazier on May 31st. Torre knew his playing career was over. After playing just two games as a player-manager, he retired to manage full time.

As a player, he had a .297 lifetime batting average along with 2,342 hits, which is a lot for a player who appeared at catcher more than at any other position. During most of the years he was eligible for the Hall of Fame voting by the BBWAA, he got 10-15%. In his last year of eligibility, he got 22%. That was, however, before most of his success as a manager. Had he not become a manager, he would likely still have been a strong contender for eventual induction in the Hall of Fame by the Veterans Committee. However, the discussion was overtaken by his overwhelming success in the second half of his managerial career. Indeed, he is highlighted in the book Heroes Behind the Mask as one of the top catchers of all-time. 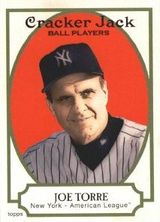 Torre remained with the Mets through the 1981 season without ever winning more than 66 games in a season with a rebuilding team. He was hired by the Atlanta Braves for 1982, when he won a division title (the Braves' first since 1969). After the 1984 season, he was fired and took a job as a broadcaster for the California Angels. Rehired as a manager by the Cardinals in 1990, Torre was mediocre with the Cards, failing to make the playoffs in parts of six seasons. He was fired after 47 games in 1995.

Torre was a manager with a losing record when he was hired by the New York Yankees on November 2, 1995, but would be extremely successful in pinstripes. Torre won the World Series in 1996, 1998, 1999 and 2000. He won six pennants and eight division titles with the Yankees. His tenure ended after the Yankees were beaten by the Cleveland Indians in the 2007 ALDS, the third straight first round postseason exit for the team. Yankee management offered him only a one-year contract for 2008, with a reduced salary and incentives based on how far the Yankees would go in the postseason. Torre declined, but did not stay unemployed for long, as he was offered the job as manager of the Los Angeles Dodgers, replacing Grady Little on November 1st. He was the Dodgers' manager for three seasons, guiding the team to the NLCS in both 2008 and 2009. He retired after the 2010 season, handing over the team's reins to long-time coach Don Mattingly. He then accepted the position of vice-president of Major League Baseball in charge of on-field operations, which made him responsible for the supervision of umpires and for handing out discipline for on-field incidents.

Many considered Torre a lock for the Hall of Fame in the first Veterans Committee election following his retirement. Indeed, when his turn for consideration first came up, he was elected unanimously on December 9, 2013, alongside two other contemporary managers with equally impeccable credentials, Bobby Cox and Tony LaRussa, who were also elected unanimously at the first opportunity. The three were inducted on July 27, 2014, alongside three contemporary players - Greg Maddux, Tom Glavine and Frank Thomas. On August 23, 2014 the Yankees retired Torre's number 6 and dedicated a plaque to him inside Monument Park. Through a fan vote, Torre was inducted into the St. Louis Cardinals Hall of Fame in 2016.

Bud Selig hired Torre as MLB's executive vice president for baseball operations in February 2011. The job included overseeing major league operations, on-field discipline and umpiring among other things. On January 4, 2012 Torre stepped down from his position with MLB to join real estate magnate Rick Caruso's bid to purchase the bankrupt Los Angeles Dodgers from Frank McCourt. The group was considered to be among the favorites to emerge as the new owners at the end of the court-supervised process, but on February 23rd, it announced that it was bowing out. The reason was that McCourt was refusing to include the parking lots surrounding Dodger Stadium in the terms of the deal, a decision that would have a significant negative impact on the future administration of the franchise. On March 23rd, Torre announced that he was returning to his former position with Major League Baseball. Torre managed Team USA in the 2013 World Baseball Classic. When Rob Manfred succeeded Bud Selig as Commissioner in 2015, Torre's title was changed to Chief Baseball Officer, but his responsibilities remained similar.

Outside of baseball, Torre enjoys horse racing, and owns an interest in several race horses. A few of his horses have competed in the Kentucky Derby over the years. See this New York Times article for details [1]. He has appeared in the films Taking Care Of Business, Everyone's Hero and Analyze That as well as television series Sesame Street, Castle and Gary Unmarried. In the 1997 TV movie biopic Joe Torre: Curveballs Along The Way, he was portrayed by GoodFellas star Paul Sorvino.