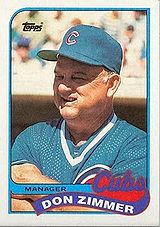 Don Zimmer, best known as a heavy-set manager and coach, was originally a scrappy middle infielder, playing roughly equal amounts of games at third base, shortstop, and second base.

He attended Western Hills High School in Cincinnati, OH, the same high school that Pete Rose would attend ten years later. He was signed by the Brooklyn Dodgers in 1949 and in 1951, he married Jean Soot at home plate before a home game at Elmira. He was seriously beaned in the minor leagues in 1953 and again in the majors in 1956. After the first beaning, when he spent twelve days largely unconscious, it was reported that he had a metal plate inserted into his skull to prevent further damage. However, this misinformation was clarified many years later: in fact, holes were drilled in his skull to relieve pressure that was building up, with titanium "buttons" inserted in the holes afterwards.

Zimmer reached the Major Leagues with the Dodgers in 1954. As was the case with Charlie Neal, another middle infielder signed at about the same time, it was very difficult for Zimmer to break into a Dodger infield that often had Jackie Robinson, Pee Wee Reese and Jim Gilliam playing at second, short, and third. Along with Neal and Zimmer, Don Hoak was another infielder trying to keep a job with the Dodgers at that time.

He was the 1955 Caribbean Series MVP, then in the 1955 season, Zimmer had 280 at-bats, hitting only .239 but getting a notable 15 home runs. He appeared in four games in the 1955 World Series, the only one the Dodgers won while in Brooklyn, usually batting eighth in the lineup.

His best year with the Dodgers was 1958, when he hit 17 home runs, the first year they played in Los Angeles, CA as the Los Angeles Dodgers. While it is hard to think of the portly Zimmer of today as a base stealer, in 1958 he stole 14 bases and was only caught twice. In 1959 he hit only .165 in 97 games. The Dodgers again won the World Series, and Zimmer appeared in one game as a pinch-runner and late-inning replacement at shortstop. 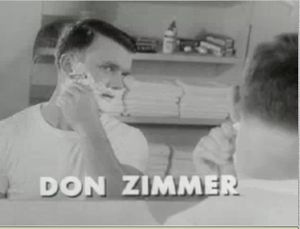 Zimmer seen in a commercial for Gillette razors

Traded to the Chicago Cubs for pitcher Ron Perranoski and others, Zimmer found himself playing in more games per season with the Cubs than he had done with the Dodgers. He was named to the All-Star Game in 1961. The next year, 1962, at age 31, he was an original member of the New York Mets, and indeed started the team's first-ever game at third base, where he committed an error on the first play of the game, starting a tradition of Met ineptness at that position that would last for two decades. He was traded early in the season to the Cincinnati Reds, and got to play in his home town. The year after that, 1963, he was briefly back with the Dodgers before being purchased by the Washington Senators in mid-season. In 1963 and 1964, he showed decent power there. In 1965, his last year, he hit .199. Strangely enough, in his last season in the majors, with the Senators in 1965, his most frequent position was catcher, a position he had only played for the first time the year before.

Both Charlie Neal and Billy Martin, his contemporaries, are on the list of the ten most similar players.

Zimmer played in Japan in 1966, as recounted in his book Zim: A Baseball Life. The other American on his Toei Flyers team was Norm Larker, who had been a teammate on the Dodgers also. He hit just .182/.213/.325 as the least-effective foreign player that year, but his 9 home runs still ranked third on Toei behind Isao Harimoto (24) and Shuzo Aono (10). He came back to the U.S to play one last season in the minors in 1967, as a player/manager with the Knoxville Smokies and Buffalo Bisons.

Don Zimmer stayed involved with baseball, and became a major league manager for the first time in 1972 with the San Diego Padres after spending a few years as a minor league manager and coach. He was one of the winningest managers in Boston Red Sox history, managing the 1978 team that lost to the Yankees in a heartbreaking one-game playoff. In spite of his success, he was blamed for the team's historical collapse and earned unflattering nicknames from some of his players, most notoriously The Gerbil, as he was called by pitcher Bill Lee, with whom he had a running feud. He was NL Manager of the Year in 1989, when the Cubs of Ryne Sandberg, Andre Dawson, Rick Sutcliffe, Rookie of the Year Jerome Walton, and a young Greg Maddux won the division. He later became a bench coach for the New York Yankees and Joe Torre from 1996 through the 2004 season. In that role, he was on the losing end of a fight with Pedro Martinez in a brawl during the 2003 ALCS. In 1999, he managed the Yankees on an interim basis for the first 36 games of the season, compiling a record of 21-15, while Torre was recovering from an operation. After leaving the Yankees, he remained involved in baseball as a senior adviser to the Tampa Bay Devil Rays (and later the Tampa Bay Rays), ans was still employed by the club and listed as a supernumerary coach when he passed away in 2014 at the age of 83. At the start of the 2015 season, the Rays honored his decade of service to the organization by retiring uniform number 66 in his honor. Surprisingly, his 11 seasons with Tampa Bay were the longest he spent with any club in one city during his long career (he also spent his first 11 seasons in the Dodgers organization, but split between various minor league stops, Brooklyn and Los Angeles).

But for his run-in with Martinez and his long career as manager and coach, Zimmer might be best remembered as the answer to this trivia question: Who was the main Dodger shortstop between Pee Wee Reese and Maury Wills?

Having spent 57 seasons in baseball, Zimmer was a special adviser for the Tampa Bay Devil Rays at the time of his passing in 2014, two months after undergoing heart surgery, and he was still officially listed as one of the team's coaches. His brother, Hal Zimmer, was a minor league 3B/OF/P, and his son, Tom Zimmer was a St. Louis Cardinals coach in 1976 and a minor league manager.

He has written two books about himself.