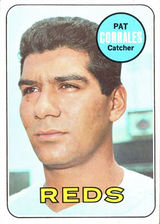 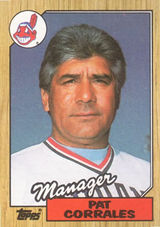 Pat Corrales was a "good field, no hit" catcher who played nine seasons in the major leagues. In an even 300 games, he hit only .216/.291/.276 with four homers. He was never a regular, earning most playing time as a rookie with the Philadelphia Phillies in 1965 by playing 63 games with 174 at-bats. Despite his limited playing time, he was named to the 1965 Topps All-Star Rookie Team. He was a backup to Hall of Famer Johnny Bench on the Cincinnati Reds from 1968 to 1972 and played briefly in the 1970 World Series against the Baltimore Orioles. In 1965, he twice reached base two times in a game because of catcher's interference. This is particularly remarkable because those are two of the only seven times this has happened in major league history.

After his playing career, Corrales became a Texas Rangers coach in 1976 and took over as the club's manager in the final game of the 1978 season. He guided the team for two more years. He was skipper of the Philadelphia Phillies in 1982 and 1983 and the Cleveland Indians from 1983 to 1987. The Phillies were in first place in a tight NL East race when they fired Corrales and replaced him with front office executive Paul Owens on July 18; Owens led them to the World Series. For his part, Corrales finished the season in last place, managing the Indians. He therefore has the unique distinction of managing first place and last place teams in the same season. With the Indians, he managed to lead the team to a rare winning season in 1986 (although the team was still only 5th in the tough AL East). This ratcheted expectations for 1987 sky high: in spring training, Sports Illustrated published a cover with a picture of the team and the headline "Best Team in the Majors?" When the Indians regressed to mediocrity, he was fired at the All-Star break.

After managing the Detroit Tigers' AAA affiliate in 1988, he was a New York Yankees coach in 1989, and from 1990 to 2006 he was a member of the Atlanta Braves staff, all under manager Bobby Cox. He was rumored to be Cox's heir apparent in Atlanta, but Cox outlasted him. In 2007, he joined the Washington Nationals as bench coach for two seasons. He came back in 2009, when his successor, Jim Riggleman was promoted to skipper mid-year, and a third time in 2011, after Davey Johnson succeeded Riggleman as manager, also in midseason.