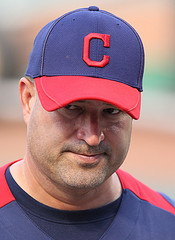 Acta started his coaching career as a player/coach for the Burlington Astros in 1991. He moved into a full-time coaching role with the Asheville Tourists in 1992. He managed in the minors for the Astros from 1993 to 2000. He was then a bench coach for the New Orleans Zephyrs in 2001.

From 2002 to 2004, he was the third base coach for the Montreal Expos under manager Frank Robinson. He managed the team for a number of spring training games and one regular season game in 2004 and had a perfect winning record. The regular season game, a 4-2 win over the New York Mets on October 1 is not counted in Acta's statistics as Robinson was present at the game, even if he had let his deputy take the team's reins for a day. After the season, he followed general manager Omar Minaya to the New York Mets, for whom he was the third base coach in 2005 and 2006.

He had been in the running for a number of Major League manager positions and was on the short list for the Arizona Diamondbacks job after the 2004 season, but lost out to Wally Backman (who had to resign the position a few days after being hired) and Bob Melvin. He finally was the successful candidate in the competition to succeed Robinson at the helm of the Washington Nationals following the 2006 season. He surprised everyone by keeping the Nationals out of the cellar in 2007 in spite of working with a depleted starting rotation all season. His excellent work with the young team earned him respect around Major League Baseball and put a stop to the talk that he had been hired solely to improve baseball's poor record on hiring minorities for management positions. However, things went sour over the following two seasons, as the Nats sank in the standings in 2008, finishing with the worst record in the majors, then played even worse in the first half of the 2009 season. Acta was fired at the All-Star break and replaced by bench coach Jim Riggleman.

Acta was named manager of the Cleveland Indians in 2010 and had some success with the team. Cleveland was the surprise leader in the AL Central for most of the first half of the 2011 season, before slowing down and finishing in second place, just below .500. In 2012, the team again played well in the first half, staying close to the Detroit Tigers and Chicago White Sox, but was done in by a horrendous August, during which it was only 5-24, the worst month in the 112-year history of the franchise. Acta paid the price for the collapse, being fired with a week left to go in the season.

In 2013, Acta was hired as an analyst by ESPN. Interestingly, he was asked to work both on Baseball Tonight and on the network's sister Spanish-language network, ESPN Deportes. His two predecessors in the English-language slot, Bobby Valentine and Terry Francona, had both landed major league jobs after the high-profile assignment, something that Acta was clearly hoping to be in the cards for him as well. He did land another major league job, but as the third base coach for the Seattle Mariners in 2016, working with rookie manager Scott Servais. In 2018, he became the team's bench coach following the departure of Tim Bogar. In 2020, he moved to third base coach with the M's.

In addition to coaching and managing in the U.S., Acta gained further experience managing in winter leagues and in the World Baseball Classic. He began the 1999 Venezuelan League season as the third base coach for the Leones del Caracas, but was promoted to manager on November 16. Acta managed Estrellas Orientales in 2002/2003 before leading the Dominican Republic's Tigres del Licey to the Caribbean Series title in 2004. He returned to Licey in 2004/2005. He took another step forward by managing the Dominican Republic's team in the 2006 World Baseball Classic. Acta did not participate in the winter leagues for several years while managing MLB teams, but later assumed the role of general manager for Licey from 2013-2015. His final winter league managing experience came with the Águilas Cibaeñas of the Dominican League in 2016/2017.

He has primarily worn number 14 in the Major Leagues.