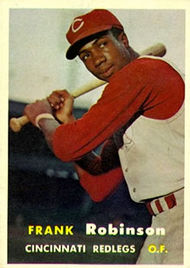 Inducted into Hall of Fame in 1982

"Going over the hitters it was decided that we should pitch Frank Robinson underground." - Jim Bouton

Frank Robinson is perhaps the least-remembered of the truly great home run hitters. A fiery player when active, he nevertheless has been in the public eye for so long as a manager and executive that memories of his playing have faded. And yet his accomplishments were numerous.

He started by winning the National League Rookie of the Year Award in 1956, hitting 38 home runs at the age of 20. That tied the major league mark for most homers by a rookie, held by Wally Berger since 1930. Mark McGwire shattered that mark in 1987, but it remained the National League record until erased by Cody Bellinger in 2017. He spent his first ten years with the Cincinnati Reds, hitting 30 home runs or more seven times and .300 five times. Vada Pinson often hit ahead of him, and Pete Rose was the lead-off hitter starting in 1963. Robinson's most notable year was 1961, when he led the Reds to a surprise pennant and was named the winner of the 1961 National League Most Valuable Player Award. He had another good season in 1962, when he hit 39 home runs, with 136 RBI and a .342 batting average. He played for the Reds in the 1961 World Series, when they lost in five games to the New York Yankees.

In 1966, the Reds decided that Robinson was "an old 30" and traded him to the Baltimore Orioles in exchange for Milt Pappas. He responded by winning the Triple Crown, the accomplishment for which he is best remembered. Also worth noting is that Robinson won the AL MVP and the World Series MVP. He was the first player to win the MVP Award in both leagues. In all, he spent six years with the Orioles, hitting over .300 four times and continuing to hit home runs. The Orioles, during his six years with them, finished in first place four times. On Mother's Day 1966, Robinson became the only player who ever would hit a ball out of Memorial Stadium - thereafter a flag was flown from where the ball had cleared the outer wall; it read merely "HERE".

After an injury-plagued year with the Los Angeles Dodgers, when he hit 19 home runs in less than 2/3 of a season in 1972, he came to the California Angels where he hit 30 home runs in 1973 at the age of 37. He finished his playing career with the Cleveland Indians.

However, that was just the start, because Robinson was to manage 17 years in the majors (the first two years as a player/manager for Cleveland). He became the first African-American manager in major league history when he took over at the helm of the Tribe in 1975. After being fired by the Indians in 1977, he spent the remainder of the year as a California Angels coach. Robinson was one of three managers of the Rochester Red Wings in 1978.

He was a member of the Orioles coaching staff from 1978 to 1980. He managed the San Francisco Giants for parts of four seasons, from 1981 to 1984, before returning to the O's as a coach from 1985 to 1987 and manager from 1988 to 1991. Robinson then served as Major League Baseball's Vice-President of On-Field Operations before coming out of retirement to manage the then Montreal Expos in 2002, after ownership of the team reverted to MLB. He managed the Expos/Washington Nationals until it was announced he would not be retained after the end of the 2006 season. He managed Team USA in the 2003 Olympic Qualifiers, when they were upset by Mexico and failed to qualify for the 2004 Olympics.

In June of 2012, he was once again hired by MLB, this time as Executive Vice-President of Player Development, replacing the recently-fired Jimmie Lee Solomon. The position included responsibility for the Urban Youth Academy, the Futures Game and the Civil Rights Game. Since being dismissed as Nationals manager, he had served on Commissioner Bud Selig's Committee for on-field matters. In 2015, with Rob Manfred replacing Selig as Commissioner, he stepped down from his position to become a special adviser to the new commissioner. He was appointed as honorary President of the American League, succeeding Jackie Autry. In January 2019, news emerged that his health had deteriorated seriously and that he had been in hospice care in southern California for the past several months, although his family had kept the matter private. He passed away in early February.

His first Baseball Card appearance was in the 1957 Topps set. 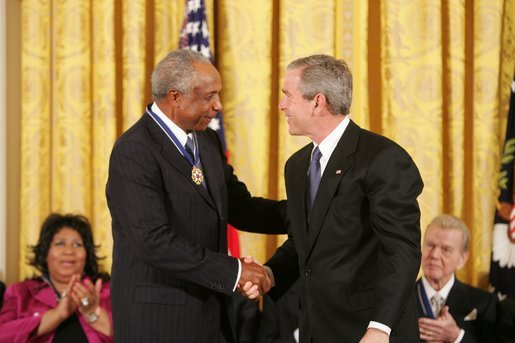 Hall of Famer Frank Robinson receives the Presidential Medal of Freedom from President George W. Bush at the White House on November 9, 2005

He was elected to the Baseball Hall of Fame on January 13, 1982 by the Baseball Writers Association of America. The election came in his first year of eligibility.

Jim Bouton wrote in Ball Four: I was warming up in the bullpen when a fan leaned out and said, "Hey Jim, how do you pitch to Frank Robinson?" I told him the truth. "Reluctantly," I said.

Roberto Clemente, speaking with Les Biederman in the September, 3, 1966 issue of The Sporting News (almost one full season after Robinson's departure from the Senior Circuit), called Stan Musial and Frank Robinson the best hitters he'd seen.

Frank Robinson was awarded the Presidential Medal of Freedom by George W. Bush in 2005. On May 27, 2017, a statue in his likeness was unveiled outside Progressive Field, commemorating his status as the first African-American manager in history.

Something else to keep in mind about Frank Robinson is that he held multiple unique distinctions as a baseball player.

If you asked any second baseman or shortstop in the 1960s who was the one guy they didn't want to see the response would have been immediately "Frank Robinson". He was the most feared baserunner of his time.

If you asked players who was the toughest player in the league the response invariably would have been "Frank Robinson". Frank hung on the plate and he wasn't wearing no "Craig Biggio Armor Plating". He ran into walls as a matter of routine. And as mentioned above, threw his body around the bases with abandon.

I think you would be hard-pressed to find a comparable player from any era with those type of credentials.

Robbie, like Whitey Herzog, understood the game is about CONFRONTATION. He just took it more seriously than Whitey. Or just about anyone for that matter.

What is now known as the "Hal McRae" rule has its origins in Frank Robinson. Frank's typical approach to second base on a potential double play was run at full speed, wait until the last minute to slide, hands thrown up, and a rolling body block for the finish.

Oh, and if happened to be in the vicinty of second base well, so much the better.

I will always remember an interview with Julian Javier discussing turning the pivot and when the interviewer asked what guys he didn't like to see coming at him the IMMEDIATE response was, "That Robinson, he CRAZY".

Frank's impact in 1966 was more than the obvious Triple Crown. He brought an "edginess" to the Orioles that had not existed before. Brooksie was a sweetheart. Boog a loveable oaf. Paul Blair, everyone liked Paul. And they HAD been winning 90 plus games without Frank so how much of a big deal was his toughness? Legit point. But the team talked about it, the opposition talked about it, and the O's just seemed like a different team.

Remember Andre in 1987 when he was hacked off about not getting a real contract and spanked the league to send a message? Frank had been termed an "old 30" and has already been described he wasn't Mr. Congeniality on a GOOD day.

Frank Robinson was one angry fella in 1966. It was something to see.

My favorite Robinson memory was the 10th inning of the sixth game of the 1971 World Series, where in spite of a pulled thigh muscle which he'd suffered running to third on Merv Rettenmund's single, he scored the winning run on a sacrifice fly by Brooks that was so short that it barely seemed to loft past the infield dirt. Robinson just willed himself to home plate, and I swear the throw was wide simply because the goddamn baseball was scared to get within ten feet of Frank Robinson. Never mind poor Manny Sanguillen. Quote: "I don't want people to say Mickey Mantle, Willie Mays and Hank Aaron in one breath and, in the next, Frank Robinson. I want them to say Mantle, Mays, Aaron, and Robinson in the same breath." Frank Robinson, 1967.