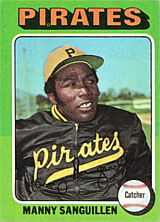 "Manny had played only a few years of organized ball before signing, having been a professional heavyweight boxer. At the plate Manny was a free swinger, equally liable to swipe at a pitch in the dirt as one at his shoulders, but he had unusually long arms and great reflexes" - George Gmelch, in Playing with Tigers

In his first full year, 1969, Manny Sanguillén hit .303 for the Pittsburgh Pirates. Sanguillén turned into a solid catcher, even if not defensively spectacular. A free swinger, he would use a huge bat in order to be able to reach pitches that were off the plate. He was a good baserunner (for a catcher) in his early years. Sanguillén liked to talk to the batters while he was catching, sometimes even if the pitch was on its way, as a way of distracting them.

Following the tragic death of Roberto Clemente, the Pirates tried to move Sanguillén to right field to replace their legendary star in 1973. Sanguillén was not able to adjust to the outfield and the experiment ended by July. Richie Zisk then took over in right. On November 6, 1976 Sanguillén was involved in an unusual trade as he was sent to the Oakland A's in exchange for manager Chuck Tanner and $100,000. He was traded back to the Pirates following the 1977 season.

After playing for the Pittsburgh Pirates for most of his career, Sanguillén played for the Bradenton Explorers of the Senior Professional Baseball Association in 1989. He has also done some scouting in Panama for the Pirates.

Manny currently chats with fans and signs autographs before most Pirates games at "Manny's BBQ", located at PNC Park on the Riverwalk behind the center field wall. He was elected to the Latino Baseball Hall of Fame as part of its 2011 class.