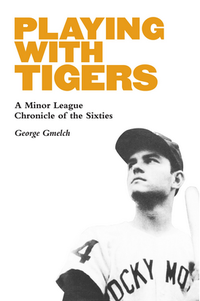 Playing with Tigers is an autobiographical book by George Gmelch that recounts his time playing in the Detroit Tigers organization in the 1960s. After his short baseball career, he would go on to earn a PhD and become a professor of social anthropology.

While baseball was not a major topic of his research at first (although he did write a seminal article on the role of magic in baseball), he eventually wrote a book on the cultural anthropology of baseball after returning to the minors as an observer in the early 1990s. When it came time to publish that book (In the Ballpark, 1998), a publisher told him he would be better advised to write a memoir about his experiences as a ballplayer. He dismissed the idea at first, but came back to it in the mid-2010s, resulting in the book which was published in 2016.

Gmelch recounts his time growing up in San Mateo, CA, a well-to-do and quickly growing suburb of San Francisco, CA where he decided he would become a professional ballplayer. He was not that good at first, but worked very hard to improve his game, his father helping him by building him a backyard batting cage complete with a pitching machine. He was a star in high school but was not signed (this was just before the start of the amateur draft). However, after a season in junior college, he did get an offer to play professionally.

A left-handed first baseman with power he began his apprenticeship as the rawest of rookies with the Duluth-Superior Dukes of the four-team Northern League, at a time when the minor leagues, devastated by television, were at their lowest ebb and hanging on mainly in small towns. Duluth, MN felt like a buzzing metropolis in comparison to the other towns that made up the league. The club, the lowest rung in the Tigers' system, was operated jointly with the Chicago Cubs, so many of his first friends were members of a rival organization, guaranteeing they would hardly ever see each other after that first stop. After two weeks of practice and only a couple of weeks of actual games - just enough for a long road trip to take him to the other three league cities, he was promoted to the Jamestown Tigers of the New York-Penn League in spite of going through a bad slump in his first few games for the Dukes.

He spent the remainder of the 1965 season with Jamestown, a last-place team on which no one hit particularly well. His own batting average was around .200, but he did have some of the best power numbers on the team. He learned about the grind of playing professional baseball every day and the danger of getting too excited over a good game or brought down by a bad one. Off the field, living away from home for the first time, he met his first girlfriend who helped him make it through the boredom of small-time life between games. Among his teammates was catcher Jim Leyland, a practical joker who was not much of a hitter but who would eventually turn into an outstanding manager. Other memorable players he faced were Manny Sanguillen and Woodie Fryman, both with the Batavia Pirates, and teammate George Korince, one of the few players from his team to make it to the big leagues.

The following spring, he headed to the team's minor league complex, "Tiger Town" in Lakeland, FL, where every player in the organization was fighting for a job with one of the minor league affiliates. He managed to stand out with some excellent hitting, earning a job with the Daytona Beach Islanders in the Florida State League, while also getting an appreciation of the strength of the competition between where he stood and the Show. He did well for the Islanders, as he was leading the team in average when he got promoted in mid-year to the Rocky Mount Leafs. One other positive thing that happened for him was that he was somehow classified as 4F, i.e medically unfit for military service, meaning that he would not have to face possible service in the Vietnam War. At Rocky Mount, a team packed with prospects, he went into a prolonged slump that put him on the bench, got send down to the Statesville Tigers, where he hardly played, and pleaded with Don Lund, the Tigers' farm director to be sent back to Daytona Beach, where he finished the year on a good note. However, he realized that he was no longer fully consumed by the desire to reach the major leagues. With his return to Stanford University for a second semester, he started to become interested in current events for the first time, with opposition to the Vietnam War being the most prominent. He also realized that one thing he really liked to do was talk to persons of different backgrounds to learn about their lives, something that struck him in his part-time work as a longshoreman on the Oakland, CA docks where most of his co-workers were members of the city's African-American community. It would eventually lead to his academic specialty of cultural anthropology, which is all about learning how people live their lives.

After leaving the United States for the first time that winter, traveling to Europe where his girlfriend from Daytona was studying, he returned to Rocky Mount for the 1967 season. After his whirlwind trip through the city the year before, this time he had time to consider how life was organized in the deep south. He was shocked at the overt racism he encountered, and at the persistence of segregation in spite of the passage of the Civil Rights Act three years earlier. He was also confronted with the abject poverty of parts of the area. He had begun to write articles about his experiences as a ballplayer for a small newspaper back in California, and got in trouble when he repeated something he has heard from a teammate who was from Rocky Mount, that the police chief was a member of the Klu Klux Klan and his brother was the local grand dragon. Somehow, the article traveled back to North Carolina, and the town pillars were far from amused. It did not help that he was not hitting well, but then nobody was on a team that was generally playing poorly. A few days, later, manager Al Federoff called him to his office to let him know he has been released, ending his career in organized baseball. However, a former teammate hooked him up with the Drummondville Royals in the "outlaw" Provincial League. He got to spend the rest of the summer in Quebec, learning a bit of French and playing much better than he had in the states, ending the year on a positive note, even though the team's ballpark was a poorly-lighted dump. The crowds were large and enthusiastic, though, which helped make baseball fun again.

He returned to Drummondville for the 1968 season, after having made a new girlfriend while spending a semester at the University of California, Santa Barbara; she would become his wife shortly after the end of the season (the two are still together). Two future major leaguers were around, Paul Noce and Gregg Jefferies, respectively the young sons of manager John Noce and teammate Rich Jefferies. Also on the team was Norm Angelini, who would go on to pitch briefly in the majors. He didn't have as much success that year but it was still a positive enough experience that after spending the summer of 1969 working on a field project in Mexico as part of his graduate studies, he felt the urge to come back for one final year in 1970, which was also the final season of the Provincial League. With the arrival of the Montréal Expos in 1969, the nature of baseball in Quebec changed, as fans were drawn to the big league team and the smaller cities in the leagues could not longer survive. The more successful ones - but not Drummondville and its godawful ballpark - soon joined the Eastern League. His final season was a let-down, as the passion for the game was gone, and he quit after a few weeks, turning his back for good on his career as professional baseball player.

He then concentrated on his studies and academic career, before eventually turning back to the study of baseball in the 1990s. For the research required for this book, he returned to the extensive diaries he kept at the time, although parts of them make him cringe, as well as to some newspaper clippings he had sent to his family. He looked up former girlfriends and teammates, an altogether positive experience. Coincidentally, the Tigers organized a big reunion of former players from both their major and minor league teams around the time he was conducting his research, which helped him to reconnect with a lot of old friends. Reflecting on those years, his conclusion is that he learned a lot through baseball, even though for at least two decades he had treated that period as a parenthesis disconnected from the rest his life. He singles out the importance of learning about failure, of taking a long-term view of things, and the ability to connect with people of different backgrounds as precious lessons he took away from baseball, as well as discovering parts of North America he hardly suspected existed and learning the rudiments of a foreign language. With the passage of time, that period comes out in a much more positive light than he had expected, a perspective he realizes most of his former teammates share as well.