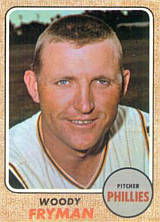 "Playing against Batavia, we faced Woody Fryman, a tall, broad-shouldered lefty from the tiny Appalachian town of Ewing, Kentucky. Woody had been a tobacco farmer; he had just signed at a tryout camp at the unheard-of age of twenty-five. He looked even older than twenty-five, he had never gone to high school, and when we heard his accent we imagined he was from one of those backwood hollows where the sun seldom shines and people lived in sagging shacks with tarpaper roofs and sat on their front porches on car seats all day." - George Gmelch, in Playing with Tigers

Despite getting a late start in baseball, pitcher Woodie Fryman won 141 games and was a two-time All-Star during 18 years in the majors. Primarily a starter during most of his career, he later found success in the bullpen, saving 46 games during a four-year stretch.

Fryman was a tobacco farmer and semipro pitcher in Kentucky prior to signing his first pro contract with the Pittsburgh Pirates, at age 25, in 1965. Originally, he listed his year of birth as 1943, later explaining that the scout who signed him did not think the Pirates would be interested in a prospect who was already in his mid-twenties. After pitching a dozen games in the minors that summer, he made his big league debut with Pittsburgh in April 1966; he would never play another game in the minor leagues. He joined the team's rotation in May and in late June and early July hurled three straight shutouts, including a one-hitter against the New York Mets on July 1st. Overall, he ended his rookie campaign with a 12-9 mark. In 1967, he struck out 15 in a game against the Philadelphia Phillies. However, after going just 3-8 for the season, he was one of four players traded to the Phillies for Jim Bunning at year's end.

Fryman was an All-Star in his first year in Philadelphia in 1968 and went 46-52 over four and a half seasons for a series of dismal Phillies teams. He was acquired via waivers by the Detroit Tigers on August 2, 1972, and went 10-3 down the stretch for the club. He won the division-clinching game by beating Luis Tiant of the Boston Red Sox, who himself had had a remarkable second half for the Sox. However, Woodie did not fare so well in the ALCS, losing in both his starts as the Tigers fell to the Oakland Athletics. He played two more seasons for Detroit, putting up sub-.500 records in each of them, before being dealt to the Montreal Expos for Terry Humphrey and Tom Walker after the 1974 campaign. 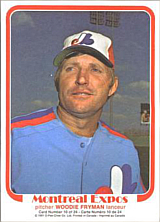 Fryman played two summers for Montreal before being dealt to the Cincinnati Reds in the deal that sent Tony Perez to the Expos. He was a very solid pitcher for the Expos, especially in 1976 when he finished 13-13 for a team that finished with over 100 losses; he was the team's sole representative at the 1976 All-Star Game and the Expos' Player of the Year. Infuriated by some of the Reds' front-office practices, he abruptly retired in mid-1977 but later agreed to return to baseball if the Reds would trade him. Accordingly, he was dealt to the Chicago Cubs in the offseason. After half a season with the Cubs, he was traded back to Montreal. He pitched a couple of memorable shutouts for Montreal that summer, blanking the Atlanta Braves, 19-0, on July 30th, and the San Francisco Giants on one hit on August 16th in a confrontation with Vida Blue, who gave up only three but lost, 1-0. Moving from the rotation to the bullpen in 1979, Woodie soon became one of the club's most solid relievers, notching 17 saves in 1980 and 12 in 1982. He finished out his career with the Expos in 1983, when his arthritic left elbow finally gave way with a loud pop as he was pitching to Floyd Rayford of the St. Louis Cardinals in the 10th inning of a tie game on July 28th; Jeff Reardon relieved him, completed a walk which was charged to Fryman, and when pinch-runner Mike Ramsey later came around to score on a bases-loaded walk, Woodie ended his career with a loss.

Fryman was inducted into the Kentucky Athletic Hall of Fame in 2005 and was also a member of the Expos Hall of Fame. After baseball, he lived near his hometown of Ewing, Kentucky, where he returned to run his tobacco farm. He died in 2011, at age 70, of Alzheimer's disease.