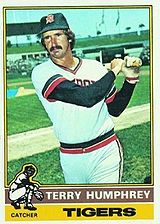 Terry Humphrey attended Carson High School in California and was picked in the 39th round of the June 1969 draft by the Montreal Expos out of the University of Nebraska in Lincoln, NE. He also attended Los Angeles City College. Shortly after the draft, he was touted as the future catcher of the Expos. He first played in 1969 with the GCL Expos, hitting .294 with a .776 OPS in 45 games. He led the team in runs, hits, doubles and RBI. He was moved up to AA with the Jacksonville Suns in 1970. Humphrey played 101 games, hitting .284 with 8 home runs and a .746 OPS. He led the team with 21 doubles and was second with 147 total bases.

He got closer to the big leagues in 1971 in AAA with the Winnipeg Whips. He played 112 games, hitting .280. His 17 doubles were second on the team as were his 151 total bases and he led Winnipeg with 56 RBI. He made his major league debut in September. In 9 games, he was 5 for 26 for a .192 batting average. He was the second player drafted by the Expos to make the majors, following pitcher Balor Moore.

He spent the whole 1972 season in Montreal, playing 69 games. His hitting suffered, with a .186 batting average after missing a couple of months with an injury early in the year. He had been expected to claim the Expos' catching job, but ended up sharing playing time with John Boccabella and Tim McCarver. In 1973 and 1974, he played both in the majors and minors. In Montreal, he hit .167 and .192 in 43 and 20 games respectively. Boccabella was the starter the first year, and Barry Foote, another product of the Expos' farm system, took over the next one, with Bob Stinson serving as backup both years. With yet another young catcher making his way to Montreal late in 1974, in the person of future Hall of Famer Gary Carter, Terry became redundant. In December, he was traded to the Detroit Tigers with Tom Walker for lefty pitcher Woodie Fryman.

He played only one year in Detroit, appearing in 18 games in 1975, missing the last three months of the season because of a separated shoulder in a home plate collision with George Brett. In December, he was involved in a seven-player trade with the Houston Astros. The Tigers sent Humphrey, Mark Lemongello, Gene Pentz and Leon Roberts to Houston for Jim Crawford, Milt May and Dave Roberts.

He never played in Houston, being sent to the Astros' AAA team the Memphis Blues. That didn't last long as he was sent packing in June 1976, along with Mike Barlow, to the California Angels for catcher Ed Herrmann. He was immediately called up to California, where he got the most playing time of his major league career the following year and a half. He played 71 games in 1976 from June on and 123 in 1977. In 1978, Brian Downing did most of the catching and Humphrey returned to backup duties. He was released on July 31, 1979.