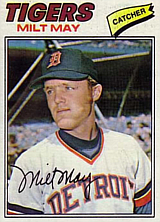 ''In 1969, when (Pinky May) managed . . . in the Western Carolinas League, the lineup of the opposing Gastonia team featured an 18-year-old catcher in his second year in the minors. The kid got into 86 games and slugged 11 homers, including ten against May’s team. The kid happened to be Pinky’s son Milt. - from the SABR biography of Pinky May

Catcher Milt May played 15 years in the majors, with a pretty decent batting average for a catcher. He was the son of third baseman and minor league manager Pinky May and brother-in-law of Pat Osburn. His son Scott May also played minor league ball in 1996-1997. His great-uncle Art Funk played in the minors.

Milt played in the 1971 World Series not long after he turned 21 years old.

May was slated to replace the legendary Roberto Clemente in the Pittsburgh Pirates lineup in 1973, with catcher Manny Sanguillen moving to right field. The experiment ended by July, as Sanguillen could not adjust to playing in the outfield, and May was back on the Pirates' bench. May was the regular catcher for the Houston Astros, Detroit Tigers, and San Francisco Giants at various points of his career. He was charged with 18 passed balls in 1975 for the Houston Astros, who had knuckleballer Joe Niekro on their staff.

Milt spent time on the coaching staffs of the Pirates, Florida Marlins and Tampa Bay Devil Rays from 1987 to 1999, winning another ring as the Fish hitting coach in 1997. In 1999 May served as Pitching Coach for the Colorado Rockies. He was a coach for the GCL Orioles in 2010-2019.