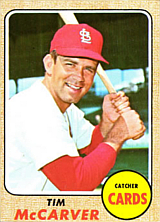 Tim McCarver had a 21-year career as a catcher in the major leagues, finishing second in the MVP vote in 1967. He is one of the few players to play in the major leagues in four different decades. After his playing days, he became a long-time broadcaster. He was an analyst for 23 World Series, a record for American television.

He was a high school teammate of Phil Gagliano at Christian Brothers High School in Memphis, TN.

In the 1964 World Series against the New York Yankees, McCarver hit .478 and slugged .739. In Game 7 of the Series, Tim batted sixth in the lineup and stroked a single, stole a base and hit a sacrifice fly, scoring and driving in a run. Most notably, the steal was of home plate, part of a double steal. He did not hit as well in the 1967 World Series, which the Cards also won, but hit .333 with a .593 SLG in the 1968 World Series. The Cardinals won Games 1, 3, and 4, with McCarver hitting a home run in Game 3, but the Detroit Tigers swept the last three games of the Series.

Tim had such a long career that he not only played 12 seasons with the St. Louis Cardinals, but he also had nine seasons with the Philadelphia Phillies. He was part of the Phillies teams that won division titles three consecutive years from 1976­ to 1978.

McCarver signed a unique contract after the 1976 season. He was offered a job as broadcaster for the Toronto Blue Jays. The Philadelphia Phillies countered with an offer to stay on as a player, then have two years as a broadcaster after the 1977 season. McCarver stayed on the field through 1979 before moving to the booth but was also activated as a player at the end of 1980 in order to allow him to become a four-decade player. With the Phillies, he was the personal catcher of Hall of Famer Steve Carlton (whom McCarver also caught as the starting catcher for the St. Louis Cardinals in the 1960s), while serving as a pinch-hitter on his days off from catching. McCarver also played for the Montreal Expos and Boston Red Sox and served two stints each with the Cardinals and Phillies.

McCarver has the 9th most passed balls in the modern era, tied with Darrell Porter at 132.

He was a television broadcaster for the Phillies from 1980 to 1982, the New York Mets from 1983 to 1998, and the New York Yankees from 1999 to 2001. He also broadcast nationally for FOX Sports, being a fixture on postseason broadcasts for 18 years, during which he partnered with Jack Buck. He was awarded the Hall of Fame's Ford C. Frick Award in 2012. Heading into the 2013 season, he announced that it would be his last one in the booth, explaining that he wanted to "to step down while I could still do the job." Thus the 2013 World Series were his last one, but he did not fully retire at that point, instead joining the Cardinals' regional cable network as a part-time analyst starting in 2014. From 2000 to 2017, he hosted the nationally syndicated Tim McCarver Show, a sports interview program.

His first baseball card appearance was in the 1962 Topps set.