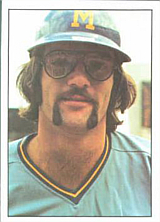 "Darrell always played like it was the seventh game of the World Series." - George Brett 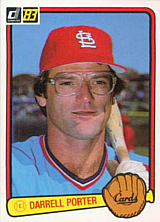 Catcher Darrell Porter played 17 years in the majors, hitting 188 home runs. He was a four-time All-Star and the MVP of the 1982 World Series.

Porter was born in 1952 in Joplin, MO in far southwest Missouri near the border with Oklahoma. He attended high school in Oklahoma City, OK and was a first-round draft pick by the Milwaukee Brewers in 1970. He played in the minors from 1970-1972, showing some power.

Porter originally came to the majors in September 1971 for 22 games and returned in 1972 for 18 more games. In 1973 he became the Brewers' regular catcher for manager Del Crandall (who had been a catcher during his playing days). Porter went on to a career similar to that of Crandall - Crandall played 16 seasons with 179 career home runs and 657 RBI, while Porter played 17 seasons with 188 home runs and 826 RBI. Darrell tied for third in the Rookie of the Year voting, behind winner Al Bumbry who hit .337 with 23 stolen bases and led the league in triples.

Porter played six seasons with the Brewers (he was four years older than Robin Yount), and was traded to the Kansas City Royals (he was a year older than George Brett), playing four seasons with them. In 1979 he had his best major league season with the bat, leading the league in walks with 121 and reaching a personal high in home runs with 20. He also drove in 112 runs, fifth in the American League, and had 10 triples, also fifth in the league. In his last year with the Royals, 1980, after missing the first weeks of the season for treatment of a cocaine problem, he appeared in the 1980 World Series.

After the 1980 season, he signed as a free agent with the St. Louis Cardinals and spent 1981-1985 with them, reuniting with manager Whitey Herzog. He could still hit pretty decently as catchers go and was in double figures in home runs most of his seasons with the Cards. He returned to the World Series in 1982, where the Cardinals defeated his former team, the Brewers in 7 games. He starred in the postseason, being named MVP of the NLCS and the World Series.

He was one of several Kansas City Royals players who struggled with drug problems in the early 1980s. Porter left the team for a time in 1980 to go into rehab. He was found dead in 2002, outside of his vehicle in Sugar Creek, MO. An autopsy listed "toxic effects of cocaine" as the chief cause of death.