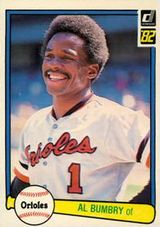 “He’s the fastest player I can ever remember playing for me. And he can bunt, as well as hit the ball off the left field wall. In so many ways, he has shown to advantage and expands our thinking so much.” - Earl Weaver, to The Sporting News, July 21, 1973

Al Bumbry was a speedy outfielder who played 14 years in the major leagues, mostly with the Baltimore Orioles.

Born Alonza Benjamin Bumbrey, Bumbry attended Virginia State University before being drafted by the Baltimore Orioles in the 11th round of the 1968 amateur draft. He began his pro career in 1969 before serving from July 1969 to June 1971 in Vietnam, where he earned a Bronze Star as a platoon leader. After returning to baseball, he made his big league debut with the O's as a September call-up in 1972.

Bumbry stuck with Baltimore for good in 1973 and hit .337 in 110 games. He had too few at-bats to qualify for the American League batting championship, or he would have been a real threat to champion Rod Carew, who hit .350, as no one else who qualified batted higher than .306. Bumbry tied a modern major league record by hitting 3 triples in a game on September 22nd. He went on to lead the circuit with 11 triples and was named Rookie of the Year. Al was a fixture in the Orioles' outfield for over a decade, with the exception of 1978 when he was injured. During that time, his team won four AL East titles, two AL pennants, and the 1983 World Series. He finished in the top ten in the American League batting race in 1977, finishing 7th with a .317 average and career high 31 doubles, and 1980, finishing 9th in his lone All-Star campaign, batting .318/.392/.433 while establishing personal bests in runs scored (118) and hits (205). The 205 hits he recorded were the most by an Orioles hitter since the St. Louis Browns franchise moved to Baltimore in 1954. Bumbry was also trouble on the base paths as he finished among the top five in stolen bases five times, with his personal best, 44, coming in his All-Star 1980 season.

After his playing days, Bumbry was a Boston Red Sox coach from 1988 to 1993. In the 1989 Hall of Fame Game, he was pressed into emergeny duty, going 2-for-3 with a stolen base. The game ended up consisting of Red Sox players against other Red Sox players since the Cincinnati Reds, who were supposed to be the opponent, had an airplane mishap and were stuck in Montreal at the time with hydraulic problems. Bumbry was later a member of the Orioles coaching staff in 1995. He had two stints as a Cleveland Indians coach, in 1998 and again in 2002. He later lent his expertise to the York Revolution of the Atlantic League as their outfield and baserunning coach in 2007.