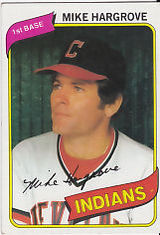 Mike Hargrove was a three-sport star at Perryton High School and attended Northwestern Oklahoma State University, where he lettered in baseball, basketball, and football. He was drafted by the Texas Rangers in the 25th round of the 1972 amateur draft. After just two seasons in the minors, he reached the majors with the Rangers in 1974, and after hitting .313 with 10 homers, won the American League Rookie of the Year Award.

He was a solid player for the Rangers for several years, and was briefly traded to the San Diego Padres, who then traded him to the Cleveland Indians for Paul Dade. He was a fixture with the Indians for 5 years, retiring after the 1985 season. Throughout his career he was noted as a patient hitter with a careful eye, who often stepped out of the box and took a lot of pitches. He exceeded 100 bases on balls in 4 seasons and typically had one of the highest on-base percentages in the league. In fact, his total base on balls exceeded his strikeout total in each of his 12 major league seasons.

After his playing career ended, Hargrove was a minor league coach for the Batavia Trojans in 1986 before spending several years as a minor league manager. He was first base coach for the Cleveland Indians in 1990 and 1991 before being promoted to manager in July 1991. After nine years as Indians skipper, during which he twice led them to the World Series, he spent four seasons managing the Baltimore Orioles, from 2000 to 2003. After spending 2004 in the Indians front office, Hargrove became manager of the Seattle Mariners in 2005. On July 1, 2007, he announced his resignation effective at the end of that day's game, which the Mariners won, pushing the team's record to 45-33. It was particularly surprising given the Mariners were on a seven-game winning streak at the time of the announcement, and Hargrove was heading for his first winning season since leaving Cleveland. While Hargrove stated that his decision was simply motivated by the fact he no longer had the competitive fire required to lead the team, speculation arose about whether the real cause may have been a conflict with superstar outfielder Ichiro Suzuki. He was replaced by bench coach John McLaren, who lasted less than a year as manager of the team.

His son, Andy Hargrove, was drafted by the Mariners in the 2005 amateur draft and played in the minor leagues.