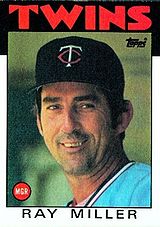 Ray Miller is known primarily as a pitching coach, but his career also included 10 years pitching in the minors (5 in AAA) and managerial work at the major league level. Miller was 60-65 in the minor leagues. A hard thrower, he was hampered by poor control. He had several good years at AAA but never got called up to the majors.

Ray's life in baseball begun on an unusual note. He was busy working on the family farm in Forrestville, MD as a youth. When he was nine, he once rode his bike onto the scene of a Little League workout. As he was the biggest kid there, the manager asked him his age. He was too young to play but was given a chance to throw batting practice. When he struck out everyone, the league altered the rules so that Miller could pitch. His father refused to let him play, but Ray's mother made the case and helped his dad come around on the issue. Miller struck out 13 in a 5-inning Little League debut and asked him how he let two guys hit the ball.

Miller reports signing with the San Francisco Giants in 1962, but he did not pitch professionally until 1964. In his first spring training in 1963, he got to play against the major league team. He got Willie Mays to pop up and struck out Willie McCovey, then got a ground-out. He figured "At this rate, I'll be pitching in the big leagues in a few years... That was just about the highlight of my career." Felipe Alou, Matty Alou and Jesus Alou got three straight line drive hits in the next inning and he knew he wasn't quite ready. Other accounts show him signing in 1964, which makes the story apocryphal. The MLB.com site says he was a veteran of the US Army's First Armored Division. Presumably he served out of high school, before his career began.

Ray was 9-11 with a 1.87 ERA for the Lexington (NC) Giants and threw a no-hitter. It was a good debut year but in a low-scoring Western Carolinas League, was not particularly great; Steve Carlton had a 1.03 ERA for instance. The Cleveland Indians selected Miller in the minor league draft after that season. In 1965, Miller was 0-1 for the Salinas Indians (6.00 ERA) and 7-9 with a 3.76 ERA for the Dubuque Packers.

Miller hit .257/~.286/.311 in 1968. He hit an inside-the-park home run that year and one newspaper account nicknamed him "Rapid Raymond". This later morphed into "Rabbit", which would remain his nickname.

Ray states that he almost made the Indians out of spring training one year but they traded for a sub-.500 winning percentage major league veteran instead. It is unclear if this story is true or not - the only notable MLB veteran acquired by the Indians in March or April in these years was Camilo Pascual, who was over .500.

Ray started 1971 back in Wichita and had a 0-1, 2.45 record in 8 appearances. He was then traded to the Baltimore Orioles. He then was 3-2 with 11 saves and a 3.16 ERA for the Rochester Red Wings. He tied for second in the International League in saves behind Don Koonce.

In 1972, Miller was 7-5 with seven saves and a 3.21 ERA for Rochester, striking out 61 in 73 innings over 47 games. In 1973, he accepted Joe Altobelli's offer to become a player-coach for a $1,000 raise. He went 1-1 with one save and a 1.38 ERA (2.76 RA) in 14 games. He allowed only 13 hits in 25 innings, but walked 20 while striking out 20. His teaching Jesse Jefferson the slider impressed the Orioles, who hired him as a full-time minor league pitching coach. Miller was also moved to quit playing and begin teaching full-time after the death of his friend and teammate Mark Weems.

Miller coached in the Orioles' minor league system from 1974-1977. In 1978, he became their major league pitching coach and achieved renown for the Cy Young Awards run by Mike Flanagan the next year and Steve Stone two years later.

After managing in the Puerto Rican Winter League and Venezuelan Winter League, Ray was hired to replace Billy Gardner as manager of the Minnesota Twins despite a fine 1984 season by Gardner's crew. Miller fired pitching coach Johnny Podres for refusing to work every couple of weeks in the bullpen. He reports that one of his big problems was learning how to spell Tim Teufel's name. After two partial seasons, Miller was replaced by Tom Kelly.

Miller then became a coach again, this time with the Pittsburgh Pirates, where he worked with another Cy Young Award winner, Doug Drabek. He spent 10 years with the Bucs.

In 1997, Ray returned to Baltimore and he became the manager later that year, replacing the famed Davey Johnson. After two indifferent campaigns in that role, he was succeeded by Mike Hargrove.

On June 26, 2004, Miller came back to Baltimore for a third stint, replacing Mark Wiley as pitching coach.