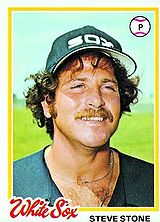 Steve was a ping-pong champion in high school and played golf and tennis as well as baseball. In 1963, he won both ends of a doubleheader in a city playoff series. In college, he was a member of the bowling and volleyball teams and played pool in addition to baseball. A frequent pool opponent was his catcher, Thurman Munson. Munson considered himself a pool shark but Stone "was careful never to disillusion him - especially when I was in the process of beating him 25 matches in a row." Steve had a 2.00 ERA in the Cape Cod League in 1968. He became the captain of Kent State University's baseball team as a junior and made the All-Mid-American Conference team.

Stone was taken by the San Francisco Giants in the secondary phase of the January 1969 amateur draft and assigned to the Fresno Giants. There, he went 12-13 with a 3.61 ERA and 184 strikeouts in 167 innings. He was fifth in the California League in batters struck out. On May 23, he whiffed 17 Lodi Crushers. From July 17th through August 22nd, he had a 7-game winning streak, including three shutouts.

Stone graduated with a teaching degree in social studies in 1970. Back on the baseball field, he had a 9-5, 3.95 season for the Amarillo Giants and was promoted to the Phoenix Giants, where he had a 5-3 record in 8 starts despite a 1.71 ERA. It was not a low-scoring league, as the median ERA in the Pacific Coast League that year was almost definitely over 4. In 1971, Steve spent part of July and August back in Phoenix, going 6-3 with a 3.98 ERA and almost a strikeout per inning, but was with San Francisco most of the season, going 5-9 with a 4.15 ERA.

Stone never returned to the minors after his 24th birthday. He had a 6-8, 2.98 record as a starter-reliever for the Giants in 1972 for a fine 117 ERA+ and allowed only 97 hits in 123 2/3 innings pitched. He had a sore arm by year's end and the Giants dealt him to the Chicago White Sox with Ken Henderson for Tom Bradley.

Stone had a 6-11, 4.24 record for the White Sox in 1973, posting a weak 5.75 ERA in 14 relief appearances but a 3.85 ERA in 22 starts, about league average. In his final outing of the season, he pitched nine innings of 12-strikeout, three-hit ball against the defending and future World Champion Oakland Athletics, perhaps the best game of his career to that point. He finished 4th in the American League in strikeouts per 9 innings. He was then dealt across the city to the Chicago Cubs with Ken Frailing and Steve Swisher in exchange for Cubs legend Ron Santo.

Stone was 8-6 with a 4.14 ERA for the Cubs in 1974. He tied for 9th in the National League with 19 homers allowed but was in impressive company, joining Phil Niekro, Tom Seaver and Steve Rogers. In 1975, the Ohioan moved up to a tie for third in the NL in gopher balls (24), even with Steve Carlton and Larry Dierker. Steve was 12-8 with a 3.95 ERA as the #2 man on the Cubs staff after Rick Reuschel.

Chicago asked Stone to take a pay cut for 1976, but he refused and told the team he would pursue free agency after the year. He had a 3-6, 4.08 record that year but tore the rotator cuff in his pitching shoulder early on, missing most of the season. The Cubs advised him to have an operation, or at least cortisone injections, but he opted against both requests from the club doctor. Going to another doctor at the University of Illinois, he underwent some odd experiments where his shoulder was frozen to try to increase the circulation to the area.

Stone became the first two-time free agent before the 1979 season and again had five offers. He inked a four-year, $760,000 deal with the Baltimore Orioles. Stone began 1979 by going 6-7 with a 4.40 ERA. Studying with Jim Palmer and Mike Flanagan, and developing patterns of music listening and meals, Stone started a whole series of changes. He began to place a toy elephant in his locker, met with a psychic and tried meditation and optimistic thought patterns. He read Sandy Koufax's autobiography five times and changed his uniform number from 21 to Koufax's old number, 32. Stone went 5-0 the rest of the year with a 2.94 ERA; his strikeout ratio improved and his hits per inning fell from 1.03 in the first half to .79 in the second half. His career record was now at 78-79. He did not pitch in the 1979 ALCS and threw two innings in the 1979 World Series, allowing two runs out of the bullpen in Game 4, Baltimore's last win of the series against the Pittsburgh Pirates.

Stone decided to try for one big year in 1980, throwing more curveballs at the expense of his arm. He later said "I knew it would ruin my arm. But one year of 25-7 is worth five of 15-15." Throwing the pitch over fifty percent of the time, he dazzled with a 3.23 ERA (123 ERA+) to go with his 25-7 mark. He led the AL in winning percentage and victories, was 7th in ERA, 9th in innings (250 2/3), tied for 7th with Jerry Koosman in strikeouts (149), the 7th-hardest to hit pitcher in the AL for the second consecutive season, second behind Jim Clancy in walks (101) and 10th in ERA+. At one point, he won 14 games in a row. He made his only All-Star team (throwing three perfect innings in the game), won The Sporting News Pitcher of the Year Award, won the Cy Young Award and was 9th in the league in MVP voting. The rest of the Orioles' stellar rotation included Jim Palmer, a multiple Cy Young Award winner in the 1970s, Mike Flanagan, the 1979 Cy Young Award winner, Dennis Martinez, who would eventually win over 250 games and pitch a perfect game, and Scott McGregor, who twice finished as high as sixth in the Cy Young Award voting.

The heavy curveball diet took its toll and Stone struggled with tendonitis in 1981, going 4-7 with a 4.60 ERA and reaching the point where his career ended a year after his best season.

In 1983, he joined WGN-TV as an analyst, alongside the legendary Harry Caray, a pairing that lasted 15 seasons until Caray's death in February 1998. Chip Caray replaced his grandfather alongside Stone that season, and they stayed together until 2004, with the exception of 2001-2002, when Stone stepped out of the booth for health-related reasons. He later called White Sox games for WSCR-AM (670) and moves to the TV side in 2009, where he worked alongside long-time Sox play-by-play announcer Ken "Hawk" Harrelson and Jason Benetti. Stone continues to contribute as the baseball expert for Chicago's WSCR-AM (670), making semi-regular appearances on several score programs.

He also has continued to play ping-pong regularly, has run restaurants in Chicago, IL and Scottsdale, AZ, plays chess and writes poetry.