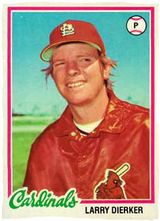 Larry Dierker was a pitcher and later a manager of the Houston Astros. He won 20 games for the club in 1969, becoming the first twenty-game winner in franchise history, and was twice an All-Star. As a manager, he led the club to four division titles in five seasons.

He broke into the majors on his 18th birthday. He is one of only two teenagers ever to make his major league debut on his birthday (the other is Chris Haughey). His first baseball card appearance was in the 1965 Topps set. He pitched a no-hitter on July 9, 1976 against the Montreal Expos.

He was also an Astros broadcaster before and after his managerial stint.

Astros' owner Drayton McLane announced at the end of the 1996 season that Dierker would be replacing the fired Terry Collins as the new manager of the team. This decision was widely panned as Dierker had spent the previous years since his retirement in 1977 as the team's color commentator and was considered to have no qualifications. Despite this, the team reached new levels of sustained success under his leadership. He was generally well-liked by the media and fans because of his personality and honesty during interviews.

Dierker had a mostly hands-off approach managing games. Characteristics included his runners usually having the green light and his rare use of bunts. Pitching-wise, he tended to let his starters pitch into the 7th and 8th innings, reflecting the expectations placed on him as a pitcher in the 1960s and 1970s. He valued players who were strong both on offense and defense. An example was his hesitancy to use prospect Daryle Ward because of his defensive shortcomings. While he was sometimes criticized for his hands-off approach, he revealed in his book This Ain't Brain Surgery: How to Win the Pennant Without Losing Your Mind that his decisions were based on statistics and tendencies.

His five-year tenure as Astros' manager is remembered as having successful regular seasons, but failure in the playoffs. Despite four playoff appearances in five years and an overall record of 435-348 (.556 winning percentage), Dierker was fired after the 2001 season after another Wild Card loss to the rival Atlanta Braves.

During a June 13, 1999 game against the San Diego Padres, Dierker collapsed with a grand mal seizure in the Astros dugout. The game was suspended and Dierker was rushed to the hospital. Afterwards, he was diagnosed with a dislodged collection of blood vessels in his brain. He missed a total of 27 games in which bench coach Matt Galante guided the team to a 13-14 record. Dierker was back managing the team when the game resumed on July 23rd.

Baseball Historian and Other Activities[edit] 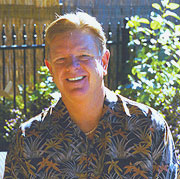 Dierker is a member of the Society for American Baseball Research and was a guest lecturer at a Library of Congress symposium in October 2009.

Dierker has written a regular baseball column for the Houston Chronicle, and produced a series of approximately five hundred three-minute radio vignettes for Astros radio pre-game shows. He has written two baseball books, It Ain't Brain Surgery, which detailed his baseball career as a pitcher and a manager, and My Team, in which he ruminated on the greatest players he knew in his years of baseball. He currently works as a freelance writer, speaker and broadcaster, and his projects include a baseball-themed musical.