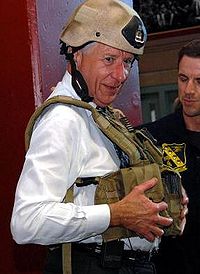 Drayton McLane was the owner of the Houston Astros. He made his fortune operating a chain of grocery stores. He purchased the Astros in 1992 from a group led by John McMullen for $115 million. On May 16, 2011, he announced that he had sold the club to a group of businessmen headed by Jim Crane; the sale price was estimated at $690 million.

During McLane's tenure, the Astros made a series of post-season appearances, culminating with their first trip to the World Series in 2005, where they were swept in four games by the Chicago White Sox. They fell back in the standings after that peak, however and were among the majors' worst teams when McLane sold the team.

In September 2013, McLane was sued by new owner Crane, who claimed the former owner had fraudulently misrepresented the value of Comcast SportsNet Houston, the regional cable sports channel included in the team's sale. Crane claimed he would lose "hundreds of millions of dollars" because McLane had overstated the network's reach in the Houston market and its profit potential.

This page is in need of some additional content. Please help the Bullpen by expanding it, or learn how to contribute.
Retrieved from "https://www.baseball-reference.com/bpv/index.php?title=Drayton_McLane&oldid=1232686"
Categories: