Note: This page links to major league infielder and manager Jimy Williams. For other players with similar names, click here. 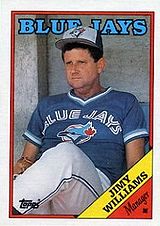 Jimy Williams is the former manager of the Toronto Blue Jays, Boston Red Sox and Houston Astros. He had the most wins by a Red Sox manager in the second half of the 20th century.

As a player, he was a shortstop with a reputation for good defense, and showed a decent bat in 1965, his first minor league season. Playing with the Waterloo Hawks of the Midwest League, an affiliate of the Boston Red Sox, he hit .287 in 115 games. That prompted the St. Louis Cardinals to select him in the minor league draft for the 1966 season, but after only playing in 13 games over almost four months, in which he went 3 for 11, he was called for military service and missed the rest of the year. He started 1967 with the AA Arkansas Travelers but was promoted to the AAA Tulsa Oilers after 28 games in which he hit .208. Even though he only hit .226 in AAA, he still received a call-up to the Major Leagues in September, but went hitless in the only game he played. He did collect a World Champions bonus cheque that year, though.

On February 8, 1968, he was included in a trade of defensive catchers with the Cincinnati Reds, accompanying another future major-league manager, Pat Corrales, to Cincinnati, while Johnny Edwards headed to St. Louis. He spent the entire 1968 season in AAA with the Indianapolis Indians but only hit .226 while alternating between second base and shortstop. His lack of hitting motivated the Reds not to protect him for the 1969 Expansion Draft and he was selected by the Montreal Expos with the 32nd pick. However, he hurt his shoulder moving some furniture during the off-season and had to spend all but a month of the 1969 season on the disabled list. When he played, for the AAA Vancouver Mounties, he hit .258 in 66 at bats. He returned to AAA in 1970, with the Buffalo Bisons who became the Winnipeg Whips a few weeks into the year; the team was terrible, however, and Williams only hit .230 in 109 games playing all three infield positions. No longer considered a prospect, he returned for one more season in AAA. He began the year in Winnipeg, but his association with the Expos ended in tears as he was suspended for a week in June 1971, then traded to the New York Mets organization, finishing the season with the Tidewater Tides, hitting .257 overall with a career-high 5 home runs.

He began managing in the California Angels organization in 1974 with the Quad Cities Angels of the Midwest League, leading them to the first half title and the league playoffs. Promoted to the AA El Paso Diablos in 1975, he was briefly a player-manager, getting two hits in 17 at bats as a designated hitter. He managed in the minors until 1979, winning a Pacific Coast League championship with the Salt Lake City Gulls in his last season. This success led to a job with the Toronto Blue Jays as a coach, and eventually to his first major league managerial appointment.

Williams has had success at all three places he managed. He had a reputation as a no-nonsense type who cared little about his relationship with the media, but emphasized fundamentals and managing by instinct. However, he had several run-ins with players and was criticized for having too much of a "quick hook" with starters, as well as incessant shuffling of his lineups.

As manager of the Blue Jays, Williams had a well-publicized clash with George Bell in 1988. It started when Williams attempted to move Bell, the reigning MVP, from left field to designated hitter during spring training, and Bell balked at the move. Bell was re-installed as the full-time left fielder by the middle of April. On July 26th of that year, Bell made an error in the field and Williams yanked him from the game. Bell yelled at Williams on the bench and after the game announced his intention to get Williams fired.

Williams was indeed fired, but not until on May 15, 1989 after the Blue Jays got off to a terrible 12-24 start with what was one of the most talented squads in the American League. Williams didn't leave his condominium for two days after the firing and refused to speak to the press. His replacement, Cito Gaston, led the team to the 1989 division championship. Following the season, Williams was hired by Bobby Cox as a coach for the Atlanta Braves. He eventually served as the Braves' third base coach.

Success with the Boston Red Sox[edit]

When Williams was hired to manage the Boston Red Sox on November 19, 1996 by General Manager Dan Duquette, the move was heavily criticized based on Williams' unsuccessful tenure in Toronto. Many speculated that Williams had been hired because Duquette perceived that Williams was easily controllable. However, Williams did have good success with the Red Sox, taking them to postseason appearances in 1998 and 1999. Williams won praise for using his entire roster and his manage-from-the-gut style. On August 14, 1999, Red Sox star pitcher Pedro Martinez arrived at the stadium 30 minutes before a scheduled start and Williams refused to let him pitch. Martinez was unhappy, but other Red Sox players sided with Williams. Williams also successfully replaced injured closer Tom Gordon with the unconventional duo of Derek Lowe and Tim Wakefield. After the 1999 season, he was named American League Manager of the Year.

However, by 2001 Williams had worn out his welcome and the team turned against him. On May 5th, in a closed-door clubhouse meeting in Oakland, several Red Sox yelled profanities at Williams. The complaints generally related to Williams' tendency to shuffle lineups without offering any explanations to the players. It also became clear that Duquette had lost confidence in Williams. Williams was fired on August 17th and was replaced by pitching coach Joe Kerrigan. At the time, the Red Sox were just 2 games out of first place. They finished 13 1/2 games back.

Williams was hired by the Houston Astros as the 13th manager in their history on November 1, 2001. Williams led the Astros to 2nd place finishes in 2002 and 2003, but again faced criticism for shuffling lineups and also for utilizing a quick hook with starters. Williams was named a coach for the 2004 All-Star Game in Houston, but was booed mercilessly by the hometown crowd. He was fired a few days later on July 14, 2004 and replaced by Phil Garner, who took the Astros from 12 games out to a playoff berth. Williams then joined the Philadelphia Phillies staff as the team's bench coach in 2007.

Williams reportedly refers to himself as "Peanut Head". His son, Brady Williams, was drafted by the Red Sox and played in the low minors. Another son, Shawn Williams, played and coached in the minors.