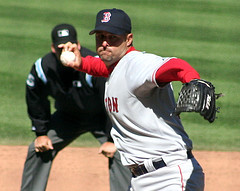 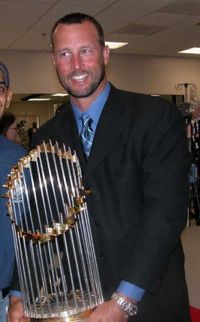 Right handed-pitcher Tim Wakefield played with the Boston Red Sox from 1995 to 2011. His 17 seasons with the Red Sox were among the most in team history. He threw a specialty pitch, the knuckleball.

Wakefield, an eighth-round draft pick in the 1988 amateur draft, began his minor league career as a corner infielder. He played this position until a scout told him that he would never get above AA ball with his skills. Wakefield then began experimenting with various other positions and developed the knuckleball that has made him so well known.

He started his major league career with the Pittsburgh Pirates in 1992, and helped the Pirates make their last playoff appearance to date with an 8-1 record. He also went 2-0 in the playoffs versus the Atlanta Braves. No Pirate rookie had a postseason decision since Babe Adams had gone 3-0 in the 1909 World Series. It would be 21 years before another Pirate rookie, Gerrit Cole, got a decision (also a win) in the postseason.

Wakefield had a poor year with the Pirates in 1993, though, and slipped even further while spending the 1994 season at Triple-A Buffalo. He turned his career around, however, when he signed as a free agent with the Red Sox in 1995. He won 16 games in his first year with the BoSox and helped them win a division title. His longevity and consistency then helped him quietly become one of the top pitchers in Red Sox history. Wakefield was the longest-serving member of the Boston team when he retired.

Over his career, Wakefield pitched in multiple roles, including starter, middle reliever, and closer.

In the 2003 ALCS, Wakefield was one of the most formidable pitchers against the New York Yankees, allowing only three runs in 13 innings. He started Games 1 and 4 of the series, with the Red Sox winning both. He was also called in to pitch in extra innings of Game 7, after the Yankees tied the game (the Red Sox had been leading 5-2 in the 8th). After retiring the side in order in the 10th, Wakefield gave up a home run to Aaron Boone on his first pitch of the 11th inning, sending the Yankees to the World Series. Wakefield apologized to fans after the game.

In 2004, Wakefield helped the Red Sox exact revenge by winning the ALCS against the Yankees, a best-of-seven series to advance to the World Series. He pitched Game 1 of the Series but did not get a decision as Boston defeated the St. Louis Cardinals, 11-9, after a two-run home run from Mark Bellhorn in the 8th inning.

Wakefield opened 2007 with decisions in his first 26 starts, the longest such streak since Jack McDowell had 27 in 1993. Despite a long career that includes several excellent seasons, it took until 2009 for him to be named to his first All-Star team.

The knuckleballer recorded his 200th career win in the majors on September 13, 2011, when the Red Sox beat the Toronto Blue Jays, 18-6. Wakefield had been forced by injuries to teammates to take a regular turn in the starting rotation that season, after being penciled in as a long reliever, and did very well in the early part of the year. He then hit a wall after recording victory number 199 on July 24th, making 7 winless starts (and a few relief appearances) before finally reaching the milestone. He announced his retirement on February 17, 2012, just as the Sox were opening spring training, ending his career with an even 200 wins.