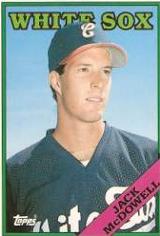 Jack McDowell was the first pick of the Chicago White Sox in the 1987 amateur draft. He went on to win the 1993 American League Cy Young Award. Away from the diamond, he fronted the bands V.I.E.W. (which featured Sox teammate Wayne Edwards on drums) and stickfigure. Through 2006, he ranks third on the list of players from Stanford University with the most major league victories, behind pitchers Mike Mussina and Jim Lonborg. McDowell earned a reputation as a fiery competitor and rebel spirit during his 12-year major league career.

The Boston Red Sox took McDowell in the 20th round of the 1984 amateur draft. He opted for college instead. In 1985, he split the Baseball America Freshman of the Year Award with Ron Wenrich. That summer, he was on the US national team, but only went 2-4 with a 5.97 ERA and one save. He had the worst ERA on the staff and walked 26 in 35 innings.

McDowell was drafted 5th overall in the 1987 amateur draft, signed with the White Sox and scout Ed Pebley, and made his major league debut later that season. He pitched in four games for the White Sox, winning three of them. His ERA was 1.93 and his WHIP was a mere 0.78. He had pitched in the minors for the GCL White Sox (0-1, 2.57 in 2 G) and the Birmingham Barons (1-2, 7.84, 4 G). Overall, he had won three times as often in the majors in two-third as many games in his rookie year.

McDowell spent the 1989 season in triple-A, readjusting his mechanics to accommodate an arthritic hip. He struggled, going 5-6 with a 6.13 ERA for the Vancouver Canadians. He made a triumphant return in 1990. "Black Jack" tied Greg Hibbard for the team lead in wins with 14 and led the White Sox with 165 strikeouts. His wicked split-finger fastball tied up opponents and made McDowell one of the games shining young talents. McDowell concluded the season by winning the final game played in Comiskey Park.

The White Sox opened the New Comiskey Park in 1991, and Jack McDowell was the stadium's opening day starter. The White Sox lost the game, but the organization showed their faith in the 25-year-old by allowing him to take center stage in a historic moment for the franchise. McDowell was tall, lanky, goateed, and unafraid to throw inside. He won 17 games and posted a 3.41 ERA in 1991. He also made his first All-Star team and finished 9th in the Cy Young Award competition.

1992 brought more success for McDowell, who was making headlines both on and off the field. He won 20 games for the Sox and was a figure in the early 1990s grunge music scene. His music was met with favorable reviews, and he was friends with some of music's biggest icons, such as Eddie Vedder. McDowell made his second All-Star team in 1992 and this time finished second in the Cy Young balloting.

Most would say that 1993 was the zenith of McDowell's career. He won 22 games, finally obtained the Cy Young Award, and led the White Sox to their first playoff appearance since 1983. The ace of the staff struggled in October, and the Toronto Blue Jays later revealed that McDowell was tipping off his pitches. In two ALCS starts, McDowell gave up ten runs and took two losses. McDowell had decisions in his first 27 starts in 1993; as of July 2007, it was unmatched, though Tim Wakefield moved within one that August.

McDowell's performance on the field slipped in 1994. His record was only 10-9 and his ERA was 3.73. Bitter contract negotiations also led to a war of words with Sox senior management. He was traded to the New York Yankees after the season, while the 1994 strike was still unresolved. Surprisingly, the Sox received very little in return: Lyle Mouton and Keith Heberling, whi never reached the majors.

Never afraid of controversy, McDowell's one-year stay with the Yankees was overshadowed by a vulgar hand gesture made to fans at Yankee Stadium. When the New York crowd booed the right-hander for a poor performance against the White Sox, McDowell hoisted his middle finger and displayed it for all to see.

He won 15 games during the 1995 season with the Yankees, but was criticized for failing to win in the playoffs. For the second time in three seasons, McDowell posted an 0-2 postseason record as the Yankees fell to the Seattle Mariners in the Division Series.

McDowell signed with the Cleveland Indians before the 1996 season. He was 16-12 in a two-year stay with the Tribe. He pitched in 30 games with a 5.11 ERA in 1996, and was discovered to have an injury in 1997. It has been said that McDowell tried to pitch through the pain of the injury, causing further damage.

McDowell was hampered by arm problems during his stay with the Anaheim Angels. He started 18 games in two seasons in 1998 and 1999, his record over that span was 5-7. He retired after the Angels released him in 1999.

Since leaving the game, McDowell has worked on his music career, posted baseball articles for yahoo.com, and served as a substitute broadcaster for the White Sox.

On January 25, 2014, McDowell stated (on his Facebook page) that he had accepted the manager's job for the 2014 Ogden Raptors, a role he held for two years. He was the first baseball coach at the Queens University of Charlotte, their program starting in 2019.