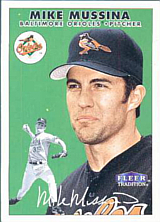 Mike Mussina had an 18-year career in the majors, winning 270 and losing 153. He had losing seasons only twice, and posted 17 consecutive seasons with 11 or more wins. In 2008 he retired after going 20-9 for the New York Yankees.

Mussina attended Stanford University at the same time as Brian Johnson, Jeffrey Hammonds and David McCarty. He passed Jim Lonborg as the pitcher out of Stanford University with the most major league appearances. Mussina was the only pitcher to beat Cuba in the 1986 Junior World Championship, striking out 16 in a five-hit shutout as the US won Bronze. Drafted by the Baltimore Orioles in the first round in the 1990 amateur draft, he spent two years in the minors. In 1990 he went 3-0 and in 1991 he was 10-4.

He was a five-time All-Star who won seven Gold Gloves; the most similar player, according to the similarity scores method, is fellow Hall of Famer Juan Marichal. While David Wells and Curt Schilling are 2nd and 3rd on the list, neither had as many wins or as high a winning percentage as Mussina. Mussina never won a Cy Young Award, despite being in the top 5 in voting 6 different seasons.

In his first year of eligibility for the Hall of Fame in 2014, he received 20.3% of the vote. While this may seem little, it was actually quite a good showing, given he was facing competition from two obviously more qualified pitchers, 300-game winners Greg Maddux and Tom Glavine, who were both elected, and holdovers Jack Morris, Roger Clemens and Curt Schilling. With first-timer Frank Thomas also elected, he had the highest vote total among the other players making their first appearance on the ballot, giving him a base on which to build for the future. In 2015, he moved up slightly, to 24.6%, then took a significant step forward in 2016, to 43%. He made another significant upward move in 2017, to 51.8%, then moved up to 63.5% in 2018, the finish line now clearly in sight. He made it the next year, 2019, when he received 76.7% of the vote. Having been associated equally with two teams during his career, there was some question as whose cap he would wear on his plaque; in the end he decided to go with a neutral look, with a cap without a logo.

In the modern era, Mike Mussina is the only AL pitcher to have won 20 games in his final season. What made this achievement even more exceptional was the fact that it was the only 20-win season of Mussina's career.