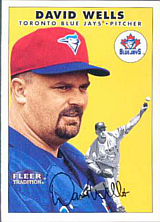 David Wells of the New York Yankees pitched a perfect game against the Minnesota Twins on May 17, 1998. [1] Wells later admitted to still being hungover and half-drunk from drinking the night before.

Wells was diagnosed with diabetes in early 2007, after years of weight control issues.

Kenny Lofton and Wells share the record for the most different teams in the postseason. Each appeared for six teams through 2007.

On July 21, 2007, aged 44 and pitching for the San Diego Padres, Wells broke Randy Johnson's record as the oldest pitcher ever to start a game against an older pitcher: he lost to Jamie Moyer of the Philadelphia Phillies. They formed the second-oldest pitching matchup in MLB history with a combined 88 years and 307 days. Only Don Sutton and Phil Niekro in June of 1987 were older.

And on September 13th, now pitching for the Los Angeles Dodgers, Wells had the first two-hit game of his career. He was the oldest player with his first two-hit MLB game since Satchel Paige 45 years earlier.

He became eligible for election to the Hall of Fame in 2013 but received only 1.1% of the vote and was dropped from the ballot.

Wells became the coach at his alma mater, Point Loma High School. The school named the field after him in 2010.