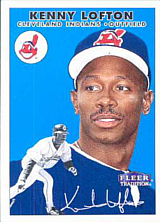 Kenny Lofton was a slap-hitting centerfielder who batted for a relatively high average and was a high-percentage stolen base threat, particularly early in his career. Valuable at the top of the lineup for many years, the six-time All-Star retired with a career .299 batting average, 622 stolen bases (15th on the all-time list) and four Gold Gloves.

Always useful but never a franchise player, Lofton was dealt often, playing for 11 teams in his major league career, only one away from the then-record of 12 set by Mike Morgan (later established as 14 [and counting] by Edwin Jackson). After a single season on the Hall of Fame ballot he fell off, and is no longer eligible to be elected by the BBWAA.

Lofton played college baseball for the University of Arizona, where he was also on the basketball team that reached the Final Four in 1988. He was signed as a 21 year-old 17th round pick in the 1988 amateur draft by the Houston Astros' scout Clark Crist and broke in the major leagues with 21 games in 1991. A lopsided deal for the Indians' Eddie Taubensee found him in Cleveland the next year.

Lofton finished second in Rookie of the Year voting in 1992 on the weight of an AL-leading 66 stolen bases, kicking off a five-year run as league champion. He became a star in the 1993 expansion year when he hit .325, fourth in the American League, scored 116 runs, and won a Gold Glove. The next year, he was again fourth in the league with a .349 average, leading the league in hits, winning another Gold Glove, and finishing 2nd in the league in runs scored. In 1995, Lofton became the first player since the 1961 expansion to have three multi-triple games in a season; 9 years later Carl Crawford topped him with four.

He continued to play quite well that year and in 1996 for Cleveland, and then in 1997 he was traded to the Atlanta Braves with Alan Embree in return for Marquis Grissom and David Justice. He hit well there, with a .333 average, and Atlanta won 101 games, but he was not happy and had a disastrous year on the base paths, leading the NL in caught-stealings (with 20) against just 27 swipes after averaging 60 steals a year with the Indians (with under 20 fails). Hoping to rebound, he returned to Cleveland the following season.

After a rather stellar first half dozen years in the bigs, his hitting and stolen bases began to drop off markedly. A ripe 25 when he became a full-time player, Lofton toppled significantly in 2000 at 32. By the next season, the last in his second stint in Cleveland, he was a journeyman, wandering to eight teams from 2002 to 2007, nine including a final return to the Tribe. Along the way he donned the uniforms of the Chicago White Sox, San Francisco Giants, Pittsburgh Pirates, and Chicago Cubs in partial seasons in 2002 and 2003, the New York Yankees in 2004, the Philadelphia Phillies in 2005, and the Los Angeles Dodgers in 2006. On occasion he hit quite well, such as in 2005 when he hit .335 in 110 games. At age 39 in 2006, he hit .301, inching his career average close to the defining .300 mark. He also stole 32 bases, getting caught just 5 times. His final season, 2007, was shared between the Texas Rangers and Indians. He hit .296, nosing it back under, and again stole successfully, with 23 steals in 30 attempts. He also scored his 1,500th run, putting him just behind Frankie Frisch 54th on the all-time runs scored list, helping the Cleveland Indians win the division for the first time in seven years.

In spite of these respectable numbers, for reasons still little understood - perhaps he was more of a "clubhouse lawyer" than reached the public, or was perceived by teammates and management as a "compiler" more interested in his own statistics at that point and a possible plaque in Cooperstown than the team winning - nobody was interested in signing Lofton in 2008, and he chose to retire.

Along with four Gold Gloves and six AL steals leads, he topped his league in hits once and triples once. A slightly above average career 107 OPS+ offensive contributor and handy man with the leather, he still never placed higher than 4th in an MVP vote, in the AL in 1994.

Lofton became eligible for election to the Hall of Fame in 2013 but received only 3.2% of the vote and was dropped from the ballot. The most similar player based on the similarity scores method is Jimmy Ryan a 19th century outfielder. Two Hall of Famers appear on his similarity list through age 40, borderline choices Fred Clarke and Enos Slaughter.

Along with David Wells, Lofton shares the record for the most different teams in the postseason, with six. He appeared in two World Series but emerged ring-less, Cleveland falling to Atlanta in 1995 and the Giants to the Angels in 2002.

Lofton's 130 career home runs were the 2nd most by any major leaguer from the University of Arizona at the time of his retirement, a school that has sent quite a few players to the bigs.

Lofton's nephew Cirroc (Lofton) played Jake Sisko on the TV show Deep Space Nine; during an episode entitled Take Me Out to the Holosuite about a futuristic game of baseball, Cirroc wore an Atlanta Braves cap as a tribute to his uncle Kenny who was playing for the Braves at that time. [1]