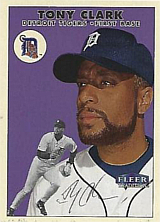 All-Star first baseman Tony Clark belted 251 home runs in 15 big league seasons. In 2013, he became the first ex-player to become the head of the MLBPA.

In high school, Tony earned All-American honors in baseball and basketball. He once held records for career and single-season points for San Diego-area high school basketball; his single-season mark broke the record previously held by NBA Hall of Famer Bill Walton. Clark also played basketball in college, although he injured his back in his freshman year and missed all of 1991, concentrating solely on baseball thereafter. After being drafted second overall by the Detroit Tigers in the 1990 amateur draft, right behind Chipper Jones, he began playing in the minors exclusively in the summer, starting in 1990 with the Bristol Tigers, where he hit .164 in 25 games. When he returned to the diamond after his one-year absence, he did much better, hitting .306 in 27 games for the Niagara Falls Rapids of the New York-Penn League. He only played 36 games in 1993, with the Lakeland Tigers of the Florida State League, but by the end of 1995, he was playing in the major leagues, after a 23-homer season in 1994 and despite hitting only .242 with 14 homers in his first full season in AAA with the Toledo Mud Hens.

It was at this point Tony became a valuable bat for hire, playing irregularly while reliably belting a number of home runs. He hit 16 in 254 at bats for the Mets in 2003, moving across town to The Bronx and the New York Yankees, hitting an identical 16 in 253 at bats in 2004 while becoming only the third man in Yankee Stadium (following Danny Tartabull and Bernie Williams) to reach the center field bleachers multiple times (since the 1970s remodel). He joined the Arizona Diamondbacks in 2005 and socked 30 big flies in just 343 at bats, en route to a stellar .304/.366/.636 line. He struggled through an injury-plagued 2006, then connected for 17 home runs in 2007 in just 221 at bats, slugging .511. Signing with the San Diego Padres for 2008, he split his final two seasons with the Friars and back with the Snakes, retiring after a July 2009 release.

After retiring, Tony briefly served as a broadcaster with the new MLB Network. He became active in the Major League Baseball Players Association in March 2010 as director of player relations. He had been a player representative for many years and was already familiar with union business. He was named deputy to executive director Michael Weiner when he was struck by brain cancer in July 2013, and replaced him on an interim basis after his passing on November 21, 2013. On December 3rd, he was confirmed and unanimously elected to the position of executive director. A few days later, he named Hall of Famer Dave Winfield as his deputy. In November 2018, his contract was renewed until 2022.