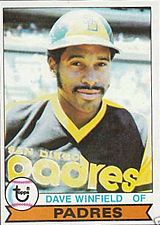 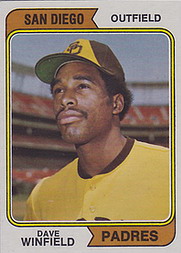 Dave Winfield was a consistently productive and, in his prime, always dangerous player on both offense and defense, ringing up over 3,100 hits and 1,800 RBI in a 22-year Hall of Fame career. Though he had the tools, the six-time Gold Glover and twelve-time All-Star never won an MVP award or led the league in batting average, on-base percentage, slugging percentage, home runs, doubles, triples, or runs scored. Still, he was both feared and coveted by rival teams.

Eight out of ten of the his most similar players are in Cooperstown, with only PED-tainted Rafael Palmeiro and Gary Sheffield possibly falling short. The single most similar player is his contemporary Eddie Murray, who also had 3,000 hits and around 500 home runs. Winfield's career was characterized by movement: he is the only player in the 3,000-hit club who had fewer than 1,500 hits for each of the teams that he played for. 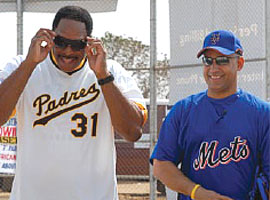 Winfield and Omar Minaya in Ghana

Following a standout collegiate career at the University of Minnesota, Winfield was drafted by four professional sports teams in three sports, including the Atlanta Hawks of the NBA, the Utah Stars of the ABA, the Minnesota Vikings of the NFL, and the San Diego Padres, who took him in the 1973 amateur draft. Ironically, he was valued as much as a pitcher than as a hitter in college, and it was not clear what position he would play in the professional ranks, but the Padres wanted him as an outfielder. Choosing baseball, he never played a game in the minor leagues in a 22-season professional career. He was the best player on very weak Padre teams from 1973 to 1980 (only the 1978 edition of the team finished over .500 during that span). In 1979, he managed to lead the National League in RBI despite the fact that "he had no one to hit in front of him or behind him", as one sportswriter famously put it at the time. Combining explosiveness, marquee value, and excellent fielding, he made the All-Star team every year from 1977 to 1988.

On December 15, 1980, Winfield signed a record 10-year, $23 million contract with the New York Yankees. It was the longest and richest contract at the time. After a solid strike-shortened season in 1981, he had a terrible World Series, going 1 for 22 as the Yankees lost to the Los Angeles Dodgers in six games, prompting Yankees owner George Steinbrenner to sarcastically dub him "Mr. May", in a demeaning comparison with superstar Reggie Jackson who always seemed to save his best performances for the limelight. Despite frequent highlights and occasional sustained excellence, the Yankees went into a downward cycle after Winfield's arrival and he was considered a disappointment by many fans. His stay in the Bronx included a career-high 37 home runs in 1982, a .340 batting average in 1984, and just three RBI short in 1987 of topping 100 RBI in seven straight years from 1982 to 1988. The home-grown Don Mattingly emerged as the Yankee fan favorite, foreshadowing Alex Rodriguez' experience two decades later.

In a widely-publicized incident, Winfield was arrested in Toronto in 1983 for killing a seagull in the outfield with a warm-up throw, but was later exonerated as it was clearly an accident. He missed the entire 1989 season due to injury, then rebounded with a productive 1990, winning the AL Comeback Player of the Year Award for the California Angels after a trade for Mike Witt on May 11th. DHing for the Toronto Blue Jays in 1992 he became the oldest player to drive in over 100 runs in a season, then avenged his 1981 World Series performance by providing key hits in Toronto's triumph over the Atlanta Braves in the World Series.

After the 1992 season, Winfield left Toronto for the Minnesota Twins in a bid to collect his 3,000th hit and finish his career in front of his hometown fans. He reached the first goal late in 1993, and was still a productive hitter when the strike cut short the 1994 season. With the Twins going nowhere, the 43-year old DH signed with the Cleveland Indians for a final shot at the postseason in 1995, but only hit .191 with no power in 46 games; he was left off the postseason roster in favor of Ruben Amaro Jr. and retired. 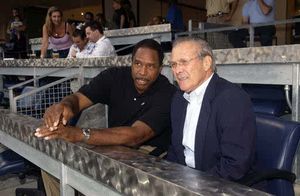 Winfield and Donald Rumsfeld in 2005

Winfield was elected to the Baseball Hall of Fame on January 16, 2001 by the Baseball Writers Association of America. His #31 was retired by the Padres in 2001, one year after he was inducted into the team's Hall of Fame.

In retirement, he worked in the front office of the San Diego Padres, holding the title of Executive Vice-President and senior adviser, and as a spring training instructor. In December of 2013, he joined the staff of the Major League Baseball Players Association as deputy to new executive director Tony Clark.

He has authored and co-authored numerous books, including Winfield: A Player's Life, Dropping the Ball, Ask Dave, Turn It Around: There's No Room Here for Drugs and The Complete Baseball Player.