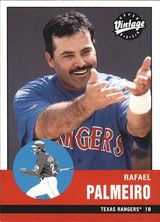 Rafael Palmeiro played 20 years in the majors and hit 569 home runs. After testifying to Congress that he had never used steroids, he tested positive in 2005 to performance-enhancing substances, a development that hastened his retirement and has completely tainted his legacy as one of the most productive hitters of his generation. Former teammate Jose Canseco published a book accusing Palmeiro of using steroids, an accusation which Palmeiro had denied.

Rafael was born in Cuba in 1964 but moved to the United States with his family as a child and attended high school in Florida. Palmeiro was signed as a 1st round pick in the 1985 amateur draft by the Chicago Cubs and scout Earl Winn. He played in the minors from 1985 to 1987, always hitting at least .295.

He broke in with the Cubs at the age of 21 in 1986 for 22 games, at a time when the best-known players on the team were Ryne Sandberg, Ron Cey and Rick Sutcliffe. In 1988, his third year with the Cubs, he hit .307, which was good enough to finish second in the National League in batting average. He then was traded to the Texas Rangers, while the Cubs went on to win the division in 1989 (Mitch Williams, the key player acquired by the Cubs in that trade, went on to save 36 games for the Cubs). Some Chicago sports radio on-air personalities have hinted and insinuated at some sort of relationship between Palmeiro and the wife of Ryne Sandberg when Palmeiro was with the Cubs, but there is no evidence to back up these rumors. They credit these rumors as the reason that Palmeiro was traded.

Palmeiro won three consecutive Gold Gloves for his play at first base from 1997-1999 although the last win was roundly criticized because he played only 28 games at the position that season, appearing primarily as a designated hitter.

Displaying little power as a pure line drive hitter with the Cubs in the late 1980s, Palmeiro gradually evolved to becoming a prolific home run hitter, four times hitting over 40, and missing the 40 mark by a small margin three other years. Palmeiro moved to the Baltimore Orioles for five seasons from 1994 to 1998, hitting at least 38 home runs in each of the last four of those seasons. Thereafter, he returned to Texas in 1999, where he continued to hit at least 38 home runs for each of five seasons. Returning to Baltimore a second time in 2004 at the age of 39 for two more seasons, his power dropped off. Asked to testify before Congress regarding the use of steroids by certain major league players, Palmeiro roundly denied that he had ever used them. The photo op resulting from his appearance was widely broadcast. 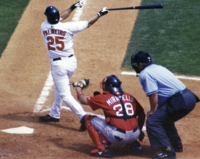 Yet, he was suspended 10 days for use of performance enhancing substances on August 1, 2005, shortly after collecting his 3,000th hit, which made him only the fourth player in major league history to collect over 500 home runs and 3,000 hits in his career. The probability of Palmeiro being inducted into the Hall of Fame was greatly reduced by the suspension. Shortly after returning from the suspension, he was hitless in 5 consecutive games and booed loudly. The Orioles told Palmeiro to go home shortly after the start of September and he did not play for the remainder of the season. He referred to a vitamin shot suggested by Miguel Tejada as a potential source of the positive test. He never played after that season. He was also named in the Mitchell Report issued at the end of 2007.

In his first year of eligibility for the Hall of Fame in 2011, Palmeiro received only 11% of the vote, a clear sign after Mark McGwire's poor vote totals that voters would not be at all lenient towards known steroid users. That total rose slightly, to 12.6%, in 2012, but fell all the way to 8.8% in 2013, the year of the infamous "steroid ballot" and then to 4.4% in 2014, dropping him off the ballot altogether.

Palmeiro played 2,831 games, a record for a player born outside the USA until Omar Vizquel broke it in 2010.

In 2017, in a bizarre development, Palmeiro told The Athletic that he was considering a comeback at age 53. He added that there was "no doubt in his mind" that he could still be an effective player at that advanced age, even with the passage of time since he had last put on a uniform. He made good on his promise a few weeks later when he signed a contract with the Cleburne Railroaders of the independent American Association. On May 21st, he made the news around the country by hitting a homer for Cleburne in a game against the Fargo-Moorhead RedHawks. That made him one of the oldest professional players to ever hit a home run and was his first since 2005, just before his suspension for PED use. He finished his return campaign with a .301/.424/.495 slash line with 6 home runs and 21 RBI in 31 games.

He is a cousin of Orlando Palmeiro. His son, Patrick Palmeiro, was drafted in the 2008 amateur draft, but Patrick went on to Grayson County College, Howard College, and then University of Alabama at Birmingham before starting a professional career in 2012. He was a teammate of his father's on the Cleburne team in 2018. Another son, Preston Palmeiro, was a 7th round draft choice by the Orioles in the 2016 amateur draft, out of North Carolina State University. Palmeiro's at-bat music was "California Love" by Tupac Shakur. He appeared in Viagra commercials.

Palmeiro holds the record for the most career home runs by a player who had a teammate with more. At the end of Palmeiro's career, he was on 569 HR, while his teammate Sammy Sosa was already on 588. They were the first teammates with 500+ HR while they were teammates.

Palmeiro also holds the record for playing in the most major league games without appearing in a World Series. His 2,831 games played easily passes runners-up Ken Griffey, Jr., who played in 2,671 games, and Andre Dawson, who played in 2,627.

He also holds the record for most home runs without ever leading either league in that category. Frank Thomas is 2nd with 521 home runs despite never leading the league in homers.