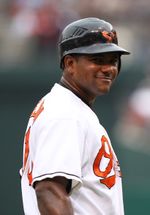 Miguel Tejada won the home run derby at the 2004 All-Star Game in Houston, TX, with a short-lived record of 15 in one round. That is just one of a number of highlights in a remarkable career that saw him win an MVP Award while being named to the All-Star team six times.

Signed by the Oakland Athletics out of the Dominican Republic in 1993, Tejada first reached the majors with the A's late in the 1997 season. He came up when two other young shortstops were making headlines in the American League, Derek Jeter with the New York Yankees and Nomar Garciaparra with the Boston Red Sox. Both had won a Rookie of the Year Award - Jeter in 1996 and Garciaparra in 1997, so at first Tejada was a forgotten man in the relative anonymity of Oakland, especially after a sub-par rookie season when he only hit .233 with 11 homers in 1998. He blossomed, however, after hitting 21 homers and driving in 84 runs in 1999. In 2000, he hit .275 with 30 homers and 115 RBI to draw his first MVP votes, then repeated in 2001 with a .267 average, 31 homers and 113 RBI. He did not miss a single game during those two seasons. Still under the radar of most fans at that point, he burst into prominence during 2002, the A's famous "Moneyball" season, when he made a number of key hits to propel comeback wins in the late season and his name suddenly became prominent. He played in the All-Star Game for the first time and finished the season with a .308 average, 34 homers and 131 RBI, scoring 108 runs. He was voted the winner of the 2002 American League Most Valuable Player Award, besting his two rivals Jeter and Garciaparra, neither of which ever were MVP.

Now a major star, Tejada continued to produce over the following seasons, without ever missing a game either. In 2003, he hit .278 with 27 homers and 106 RBI. From 2000 to 2003, he played in the postseason four consecutive years, but Oakland was eliminated in the Division Series in five games every time. His best series was the 2000 ALDS against the Yankees, when he hit .350 and scored 5 runs; his batting average in the postseason then went down each of the following three season, to .286, then .143, then .087 in 2003 ALDS when the A's lost an exceedingly close series to the Red Sox. He has not been back to the postseason since, and has a combined average of .212 with 1 homer and 8 RBI in 20 games. In 2004, after signing with the Baltimore Orioles as a free agent, he hit .311 with 34 homers and an American League-leading 150 RBI. He returned to the All-Star Game that season and finished fifth in the MVP vote. he had another All-Star season in 2005, this time leading the AL in doubles with 50, to go along with 26 homers, 98 RBI and a .304 batting average. In 2006, he hit .330, made it to the All-Star Game for a fourth time, hit 24 homers and drove in an even 100 runs while scoring 99.

Tejada played in his 1,000th consecutive game on July 1, 2006, becoming the 7th player to accomplish the feat. His streak ultimately ended on June 22, 2007 when he was placed on the disabled list with a broken wrist. In his final game, he bunted into a force play, then left for a runner in the top of the 1st inning (he broke his wrist the previous day). At the time, Tejada had played in 1,152 games, the fifth longest streak in Major League Baseball history. By a quirk of fate, Hideki Matsui of the New York Yankees, who holds the major league record of 519 consecutive games to start his career, also did not complete the top half of the 1st inning of the final game of his streak, on May 11, 2006, when he broke his wrist trying to make a diving catch. As a result of the injury, Tejada played in only 133 games in 2007, with 18 homers, 81 RBI and a .296 average. After the season, the Orioles, who had been stuck in 4th or 5th place in the AL East during his entire stay with the team in spite of his outstanding production, decided to trade him to the Houston Astros, netting five players in return, headed by P Matt Albers and OF/DH Luke Scott.

Tejada batted .208/.296/.542 as the DH for the Águilas Cibaeñas in the 2008 Caribbean Series. He tied Jose Bautista and Roberto Saucedo for the Series lead with two home runs but had the lowest OBP of any starter on the Águilas. He still somehow led the team with 6 runs. Tejada has hit 13 home runs in the Caribbean Series, breaking the record previously held by Tony Armas Sr.. He added to his record with his 14 and 15th homers with the Leones del Escogido in the 2013 Caribbean Series, and pushed past Tony Batista to claim the all-time record for RBIs, 46 to 45; he added RBI #47 in the championship game, which Escogido lost in 18 innings to Yaquis de Obregón. He also holds the all-time record for doubles and runs scored in the tournament.

Playing with Houston in 2008, Tejada made the National League All-Star squad for the first time, in spite of a significant drop in production. In 158 games, he hit .283 with 13 homers and 66 RBI. On April 17th that year, Tejada announced that he was in fact born in 1974 and not in 1976, making him two years older than everyone had thought. A much bigger lie came to light in 2009: back in 2005, Tejada had told the US Congress that he had never talked to any players about steroids; Adam Piatt later confessed that Tejada had discussed steroids with him. On February 11, 2009, Tejada admitted lying to Congress. He became the first star player found guilty of a crime related to steroids. He agreed to pay a $5,000 fine, provide 100 hours of community service, and serve a year of probation to avoid jail time. On March 24, 2010, his probation was extended by six months as he had failed to complete the required hours of community service.

Tejada originally agreed to play for the Dominican Republic in the 2009 World Baseball Classic but then withdrew when they announced plans to use him at first base. After Alex Rodriguez got injured and Adrian Beltre withdrew, a slot opened up for Tejada at third base and he agreed to play. He went 3 for 11 with a walk in the event and hit a solo homer off Sidney Ponson for the first Dominican run in a 3-2 loss to the Dutch national team. Tejada had a chance to give his club the lead in the 5th, coming up with the bases loaded and one out against Rob Cordemans but he grounded out into a double play. Tejada had another good season for the Astros in 2009 for the Astros, falling one hit short of the 200 plateau while batting .313. He led the National League with 46 doubles, but a weak line-up around him meant he only collected 83 runs and 86 RBI, to go with 14 homers. He made the All-Star team for the 6th and final time that year.

In 2010, Tejada returned to the Orioles as a free agent, moving to third base to take over for Melvin Mora. He hit .269 in 97 games, but with the O's once again going nowhere, he was sent to the San Diego Padres in return for a minor leaguer at the trading deadline. He moved back to playing shortstop with San Diego, logging 59 games, to complete the year with 156 games played, 15 homers, 71 RBI and a .269 average. In 2011, he moved to the San Francisco Giants, where he played 91 games, splitting his time between third base and shortstop. The Giants struggled all year to generate any offense to back up their tremendous pitching, and Miguel was one of the culprits, hitting only .239 with 4 homers and 26 RBI. Now 37, following the adjustment to his birth certificate, Tejada played for the AAA Norfolk Tides, in the Orioles' organization, in 2012 where he hit .259 with no homers in 159 at-bats and was released on June 25th. He appeared to have retired; however, the urge to play was still there. He played in the Dominican League in the 2012-13 off-season, helping Escogido reach the 2013 Caribbean Series, and saw his name added to the Dominican Republic's team for the 2013 World Baseball Classic; that team famously swept through its eight games to win the title, with Tejada playing regularly and exercising leadership. At the same time, he announced that he was ready to return to the big leagues in 2013, and the Kansas City Royals decided to give him a shot, signing him to a contract with an invitation to spring training. He made the team's opening day roster as a utility infielder after hitting .353 in exhibition games. On August 17th, however, he was handed a 101-game suspension for twice testing positive for amphetamines. He had previously been granted an exemption for the banned substance but had let it expire and had continued taking amphetamines, bringing the suspension upon himself. He was hitting .288 in 53 games, with 3 homers and 20 RBI. That brought his playing career to an ignominious end.

Tejada first became eligible for election to the Hall of Fame in 2019. He was considered very much a dark horse candidate, in spite of some intriguing numbers, for example leading all shortstop in homers during the 2000s­, ahead of his rivals Jeter and Garciaparra. He received only 5 votes and was dropped from the ballot.

His son Miguel Tejada Jr., also an infielder, was considered a top international amateur prospect ahead of the July 2018 signing period, but tested positive for a PED - like father like son - which deterred the Chicago White Sox, who were about to sign him, from proceeding with a contract offer.