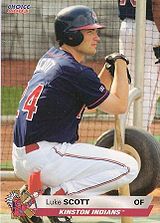 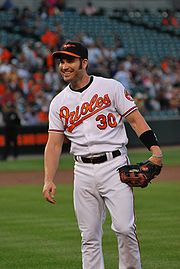 Luke Scott was a regular outfielder for the Houston Astros and Baltimore Orioles before joining the Tampa Bay Rays in 2012.

Scott, who was born in Florida, was a star at Oklahoma State University before being drafted in the 9th round in the 2001 amateur draft by the Cleveland Indians. He was signed by scout Chad MacDonald and played in the Indians' organization in 2002 and 2003, then was traded to Houston for starting pitcher Jeriome Robertson, who was a bust in Cleveland.

Scott came to the majors originally in 2005 for 80 at-bats, hitting .188. He batted twice in the NLDS against the Atlanta Braves but was hitless. The following year, 2006, he got 214 at-bats and almost doubled his batting average, hitting .336. He attracted attention with 10 homers and 6 triples in 65 games.

The following year, 2007, he became a full-time major leaguer, and slugged .504 for the Astros. Although he had many fewer at-bats than Lance Berkman, who hit 34 home runs, Scott's .504 slugging percentage was almost the same as Berkman's .510.

Scott's season was shortened by a shoulder injury in 2011. He played 64 games, hitting .220 with 9 homers while playing left field and first base after the Orioles had acquired Vladimir Guerrero over the off-season to be their designated hitter. He tried to play through the pain, but decided to undergo surgery in late July, ending his season.

While Scott has been a productive offensive player in Baltimore, he has also made the news because of controversial political pronouncements. He has in numerous interviews indicated that he is a staunch defender of Second Amendment rights and carries a weapon on his person as often as possible, giving a sense that he sees the USA as a violent society where mayhem is liable to break out at any moment, for which citizens should be prepared. At the 2010 Winter Meetings, in an interview with Yahoo Sports, he stated that he refused to believe that President Barack Obama was born in the United States, and that the President "does not represent America. Nor does he represent anything what our forefathers stood for." Orioles management immediately distanced itself from his statements.

On January 12, 2012, Scott signed a one-year contract with the Tampa Bay Rays, worth $5 million dollars. He was expected to become the team's primary designated hitter. Showing he had not lost his gift for making controversial statements, on the eve of the Rays' first visit to Boston's Fenway Park - and the ballpark's 100th anniversary - he said: "As a baseball player, going there to work, it's a dump"; he added that the Red Sox should demolish the park and build a new state-of-the-art facility on its site. He played 96 games for the Rays 83 of them as the DH and 6 at first base - and hit .229 with 14 homers and 55 RBI. In typical fashion - for him -, he showed up in spring training in 2013 carrying with him the stuffed head of a wild boar he had shot himself with a bow and arrow. He played 91 games that season, hitting .241 with 9 homers and 40 RBIs. While he was the rays' most-used DH that year, he lost his job down the stretch after Tampa Bay had acquired Delmon Young from the Philadelphia Phillies, and he did not play at all in the postseason. He struggled with various injuries both of his seasons in Tampa.

He signed with SK Wyverns of the Korea Baseball Organization for 2014, taking a significant pay cut, since no major league team was interested in his services. He hit .267 in 33 games, with 6 homers and 17 RBIs. He was back in organized baseball in 2015, splitting the season between the Buffalo Bisons of the International League (52 games, .240, 4 homers) and the Pericos de Puebla in the Mexican League (28 games, .292, 7 homers). Then after being out of baseball in both 2016 and 2017, he attempted an unlikely comeback at the age of 39 in 2018. He did not have a team willing to offer him a contract though, so he went to the special spring training camp for unsigned free agents organized that year by the Players Association but he failed to convince anyone to give him another shot.