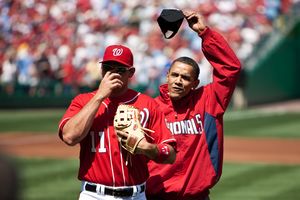 Obama waves to the crowd at the 2010 Nationals home opener.

When it comes to the debate between the Cubs and the White Sox in his adopted city of Chicago, Obama has declared himself as a Sox fan. The 2008 Upper Deck "Presidential Predictor" card of Obama shows him wearing a White Sox jacket while catching a ball from the stands just above an outreached glove like Steve Bartman. During the 2008 campaign, he was asked if he would be rooting for the NL or AL team should they face each other in the 2008 World Series. He responded: "Oh, that's easy. White Sox. I'm not one of these fair weather fans. You go to Wrigley Field, you have a beer, beautiful people up there. People aren't watching the game. It's not serious. White Sox, that's baseball. Southside."

When asked at the Democratic presidential candidates debate in August of 2007 whether he would honor Barry Bonds with an invitation to the White House if he were president today, Obama declined to answer until Bonds actually broke Hank Aaron’s record. At the time, Bonds was sitting on 755 home runs. The next day, Obama stated that "If I were president, I probably would. It's a remarkable achievement. And he deserves, I think, our congratulations." 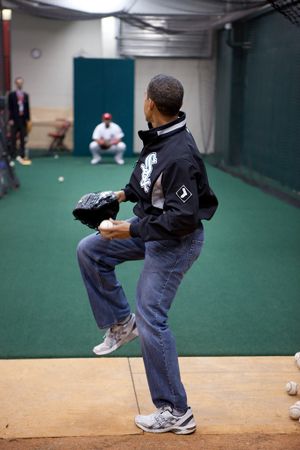 A friend of Obama's says that he loves "all sports", but for his own participation he focuses mostly on pick-up baskeball games and golf. His wife Michelle comes from an athletic family and played baseball among other sports as a child.

The President had been invited to throw out the ceremonial first pitch at the 2009 Civil Rights Game, but was unable to attend due to matters of national security. [3] 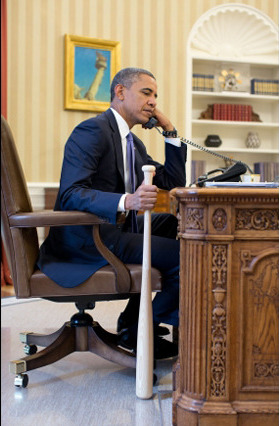 Photo of Obama and the baseball bat

A photo showing the President holding a baseball bat while speaking to the Turkish Prime Minister caused some controversy in July 2012. "Reporters bombarded White House secretary Jay Carney on Monday with questions over possible hidden meanings in the photo of the bat-wielding Obama. Carney explained the photo by saying the president was a baseball fan and avid supporter of the Chicago White Sox." [4] Others accused him of practicing "Chicago-Style Politics" [5] alluding to the Chicago mob use of baseball bats to exact physical retribution on certain individuals.

The President won re-election in 2012. One of the major foreign policy initiatives of his second term was improvement of relations with Cuba, including the reopening of embassies. This had a significant impact on baseball, as, although the flow of defectors only kept growing, Cuban authorities began to make moves to allow certain players to play abroad, including in the United States without having to defect. Major League Baseball was able to organize a goodwill tour of players to the island - including former defector Jose Abreu - after the 2015 season, and on March 22, 2016, President Obama attended an exhibition game between the Tampa Bay Rays and the Cuban national team at Estadio Latinoamericano in Havana alongside Cuban President Raul Castro. The breakthrough in diplomatic relations led to a historic agreement between MLB and the Cuban Baseball Federation in December 2018, but it was revoked by his successor, Donald Trump, only a few months later.

One of Obama's last official gestures as President, on January 16, 2017, was to host the World Champion Chicago Cubs at the White House, the first visit by the team to the hallowed mansion since 1888. Being from Chicago, he did not want to leave that honor to his successor, although, as he stated in referring to First Lady Michelle Obama, "I can't claim that I have the same just visceral joy of some in this White House".