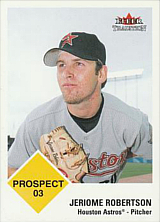 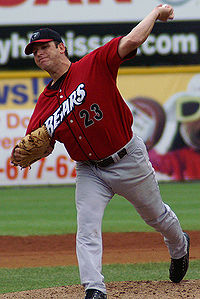 After attending Exeter Union High School, Robertson was selected by the Houston Astros in the 24th round of the 1995 amateur draft. He made his pro debut the following summer, 1996, and rose through the ranks of the Astros farm system. After leading the Pacific Coast League with a 2.55 ERA in 2002, he earned a September call-up to the majors, making one start and ten appearances out of the bullpen. He won 15 games as a member of the Houston rotation in 2003 and finished seventh in National League Rookie of the Year voting.

The Astros acquired Roger Clemens and Andy Pettitte prior to the 2004 campaign, and the club traded Robertson to the Cleveland Indians for Luke Scott. However, he struggled after the deal, posting a 7.27 ERA in 14 outings for the Triple A Buffalo Bisons and giving up 19 earned runs in 8 appearances for the Indians. In his final big league contest, on July 21st, he hit Magglio Ordonez with a pitch and was ejected from the game. That August, he was dealt to the Montreal Expos for Pierre-Luc Marceau.

Robertson spent 2005 in the Cincinnati Reds organization and 2006 in the New York Mets chain. He later played in the independent Atlantic League, the Mexican League, and the Chinese Professional Baseball League.

Robertson died at age 33 after losing control of and crashing his motorcycle.