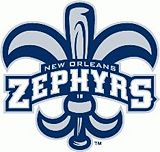 In 2001, the Zephyrs had the second-best regular-season record behind the Tacoma Rainiers. They won the first round of the playoffs against the Iowa Cubs, but the finals were cancelled in the wake of the attacks of September 11th and New Orleans and Tacoma were declared co-champions. In 2005, the club cancelled its final three home games due to Hurricane Katrina. On April 22, 2016 it was announced that the team would be changing their name following the season. The new name was the New Orleans Baby Cakes.

This page is in need of some additional content. Please help the Bullpen by expanding it, or learn how to contribute.
Retrieved from "https://www.baseball-reference.com/bpv/index.php?title=New_Orleans_Zephyrs&oldid=1197484"
Categories: