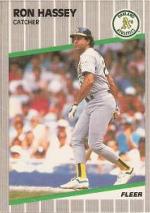 Hassey led Team USA to a Gold Medal in the 1975 Intercontinental Cup. He paced the event in runs (9) and tied for the most hits (14). He led the 1975 Pan American Games with 9 RBI; the US won the Silver Medal. He also won Gold with the US at the 1974 Amateur World Series.

He had the highest average among all catchers in 1980 with a .310 batting average. He missed most of 1984 with a knee injury, also missed much of 1987 season with a bicep injury.

In less than a one year period, Hassey was traded between the New York Yankees and Chicago White Sox three times.

After his playing career ended, Hassey spent a year as a Yankees scout before joining the expansion Colorado Rockies as a coach for their first three seasons (1993-1995). After spending a year as a St. Louis Cardinals coach in 1996, he worked in the Arizona Diamondbacks front office for seven seasons. He managed the Carolina Mudcats in 2004, and in 2005 and 2006, Hassey was a Seattle Mariners coach.